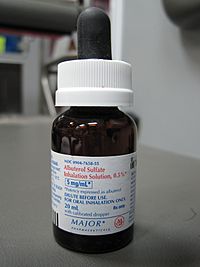 Albuterol (also called salbutamol outside of the United States) is a type of medicine. It is a bronchodilator. This means it makes the bronchi - the tubes that bring oxygen to the lungs - get wider.

Other names for albuterol

Albuterol is a generic medicine. In Canada and the United Kingdom, this generic drug is called salbutamol.

There are many different brand names for albuterol. The most common are Accuneb, ProAir, Proventil, and Ventolin.

Sometimes, diseases like asthma or chronic obstructive pulmonary disease (COPD) make the bronchi get narrower. This makes it harder for oxygen to get to the lungs. This can cause trouble breathing or even respiratory failure, which means the body is not getting enough oxygen to survive.

Every part of the body needs oxygen to live. Without enough oxygen, parts of the body - like the brain - will start to die. Finally, a person's heart can stop if they do not get enough oxygen for a long enough time.

Albuterol can often keep these things from happening. Often, people with diseases like asthma or COPD are prescribed albuterol inhalers. As soon as they start having trouble breathing, they can use the inhaler to breathe albuterol right into their lungs. The albuterol will stop the bronchi from getting narrower, and will make them wider again. This makes it possible for normal amounts of oxygen to get to the lungs.

Albuterol has some common side effects. They include:

Albuterol can also cause tachycardia (fast heart rate) and palpitations (feeling like the heart is pounding or fluttering). Because of this, albuterol is used carefully in people who have heart problems.

All content from Kiddle encyclopedia articles (including the article images and facts) can be freely used under Attribution-ShareAlike license, unless stated otherwise. Cite this article:
Albuterol Facts for Kids. Kiddle Encyclopedia.