Itch (Latin: pruritus) is an unpleasant sensation that leads to the desire or reflex to scratch. Itch has many similarities to pain and both are unpleasant sensory experiences but their behavioral response patterns are different. Pain creates a reflex withdrawal while itch leads to a scratch reflex. Nerve fibers for itch and pain both are in the skin, but information for them is sent centrally in two distinct systems that both use the same nerve bundle.

Historically, the sensations of itch and pain have not been considered to be independent of each other until recently where it was found that itch has several features in common with pain but has important differences. 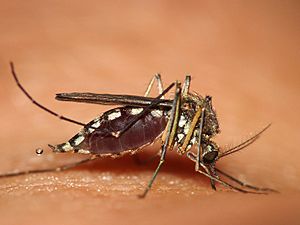 Mosquito bites can cause itching

Events of "contagious itch" are very common occurrences. Even a discussion on the topic of itch can give one the desire to scratch. Itch is likely to be more than a localized phenomenon in the place we scratch. Results from a study showed that itching and scratching were induced purely by visual stimuli in a public lecture on itching. The sensation of pain can also be induced in a similar fashion, often by listening to a description of an injury, or viewing an injury itself.

There is little detailed data on central activation for contagious itching, but it is hypothesized that a human mirror neuron system exists in which we imitate certain motor actions when we view others performing the same action. A similar phenomenon in which mirror neurons are used to explain the cause is contagious yawning.

A variety of over-the-counter and prescription anti-itch drugs are available. Some plant products have been found to be effective anti-pruritics, others not. Non-chemical remedies include cooling, warming, soft stimulation.

Sometimes scratching relieves isolated itches, hence the existence of devices such as the back scratcher. Often, however, scratching can intensify itching and even cause further damage to the skin, dubbed the "itch-scratch-itch cycle".

All content from Kiddle encyclopedia articles (including the article images and facts) can be freely used under Attribution-ShareAlike license, unless stated otherwise. Cite this article:
Itch Facts for Kids. Kiddle Encyclopedia.