Intravenous injection or intravenous therapy means putting liquid into a vein, using a needle. Many medications can be given intravenously. 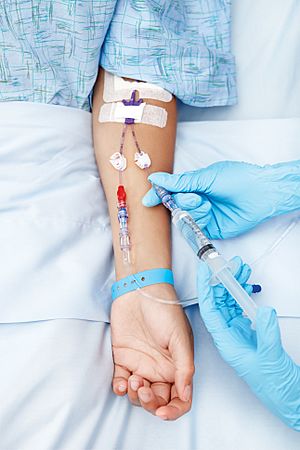 A person getting an intravenous injection of medication

When medications are given in other ways, they do not work as fast. Also, not all of the drug reaches the bloodstream.

However, medications given by IV do not last as long as medicines given by mouth As soon as the drug reaches the bloodstream, the body begins to break it down so the body can get rid of it.

There are two types of intravenous injections. 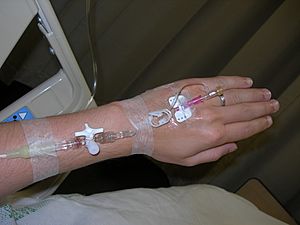 Example of an IV line. The catheter is the red plastic object. It is attached to tubes that are taped to the person's arm. Liquids injected into those tubes will travel through the catheter and into the vein

The second type of IV injection is called an "intravenous (IV) line." This is usually what medical professionals mean when they say a patient is getting an IV.

To do an IV line, a medical professional will:

An IV line allows medical professionals to give different liquids at different times, without having to put a needle into a vein every time. They can also give many medications at the same time.

Intravenous lines are often used in emergency medicine. Many things can be given through an IV line.

Losing too much fluid is dangerous. People need liquid in their bloodstream to carry blood cells, glucose (sugar), electrolytes (salts), and many other important things. Usually, the blood plasma (the liquid part of blood) does this job. However, people can lose plasma for several reasons. For example:

Volume expanders add to the amount of liquid in the bloodstream. They help plasma do its job.

There are a few common volume expanders. They are mixtures of liquids and other things the body loses when a person loses fluid:

Examples of medications that can be given by IV include:

If a person cannot eat for a short time, nutrition can be given through an IV line. IV nutrition mixtures include water, electrolytes, glucose, amino acids, lipids (fats), and vitamins.

All content from Kiddle encyclopedia articles (including the article images and facts) can be freely used under Attribution-ShareAlike license, unless stated otherwise. Cite this article:
Intravenous therapy Facts for Kids. Kiddle Encyclopedia.