Point Lookout is a headland, small coastal town and locality on the eastern coast of North Stradbroke Island, Redland City, Queensland, Australia. At the 2011 census, Point Lookout had a population of 678.

A lighthouse is situated in Point Lookout. 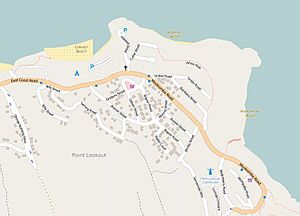 Point Lookout is Queensland's most easterly point. To the north lies Cape Moreton and to the south the next major headland is Point Danger on the New South Wales/Queensland border. The other towns on the island are Dunwich and Amity Point. Point Lookout is an excellent fishing spot, as is Jumpinpin Channel on the south of the island.

In the west near the caravan park is Rocky Point and Adder Rock. Cylinder Beach extends eastwards towards Cylinder Headland. Frenchmans Beach fronts Frenchmans Bay. At the eastern extremity is North Gorge and Whale Rock. Offshore are several rocky outcrops above sea level. The headland is an ideal location for land-based seawatching in Australia. Humpback whales can also be seen from here as they migrate along the east coast of Australia. The area is mostly residential houses and tourist apartments built close to the beach and atop nearby ridges to take advantage of sweeping Pacific Ocean views. There are a few shops and a caravan park at Point Lookout.

There is no railway on the island, the nearest station being in Cleveland 19 miles (31 km) to the west. Dunwich airport is 9 miles (14 km) southwest.

The point was first sighted by James Cook in 1770. The single greatest loss of life resulting from a submarine attack in Australian waters occurred off Point Lookout on 14 May 1943 when the hospital ship AHS Centaur was sunk by a Japanese submarine.

Point Lookout has a number of heritage-listed sites, including Point Lookout Foreshore along East Coast Road.

All content from Kiddle encyclopedia articles (including the article images and facts) can be freely used under Attribution-ShareAlike license, unless stated otherwise. Cite this article:
Point Lookout, Queensland Facts for Kids. Kiddle Encyclopedia.