Landsborough is a town and a locality in the Sunshine Coast Region, Queensland, Australia. In the 2016 census, Landsborough had a population of 3,812 people. 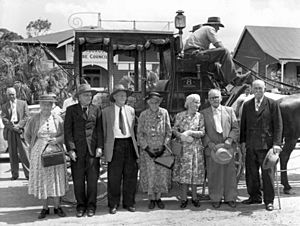 North Coast pioneers standing near Cobb & Co coach outside Landsborough Shire Chambers, which was then located on Landsborough Maleny Road

Landsborough was named for the British born explorer William Landsborough who was the first European to cross Australia north to south. The earliest European settlers arrived in the area in 1871. Originally called Mellum Creek ("mellum" is an Aboriginal word for "volcano"), it dates from 1871 when Isaac Burgess erected a slab hut with bark roof as "port of call" for Cobb and Co coaches stopping for refreshments and a change of horses.

Mellum Creek Post Office opened on 23 January 1881. It was renamed Landsborough in 1890.

In the past Landsborough was one of the larger towns of the Sunshine Coast having a large logging industry. In comparison, beachside Caloundra was a fishing village to its east, as opposed to the larger popular tourist destination it is today. 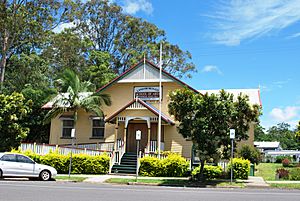 The Landsborough School of Arts Memorial Hall was celebrated with a stump capping ceremony on 24 November 1923 involving Member of the Queensland Legislative Assembly for Murrumba, Richard Warren. The hall was officially opened on 4 May 1924 by Queensland Governor, Matthew Nathan.

Landsborough has a number of heritage-listed sites, including:

Landsborough today is a popular tourism stop off due to the fact it is the first stop and is often regarded as the Gateway to the hinterland Tourist Trail. Landsborough today features parks and playgrounds, such as Pioneer park. There is a museum located in the former Landsborough Shire Council Chambers which contains a large number of historical artefacts from the local area. Landsborough's economy mostly derives from small businesses, with many cafés and small eateries.

The Landsborough Shire Museum houses artefacts from the pre-colonial and the early pioneer years from the area of the former Landsborough shire and the modern day Caloundra City region. Of note are the artefacts belonging to explorer William Landsborough.

The Landsborough railway station provides access to Brisbane, Nambour and Gympie via train and is the major bus transport hub for the coastal regions of the Sunshine Coast.

Landsborough State School opened in September 1879 and currently caters for students from prep to year six.

All content from Kiddle encyclopedia articles (including the article images and facts) can be freely used under Attribution-ShareAlike license, unless stated otherwise. Cite this article:
Landsborough, Queensland Facts for Kids. Kiddle Encyclopedia.