Aussie World is a privately owned, medium-sized, family theme park on the Sunshine Coast, Queensland, Australia. It has over 30 rides and attractions.

It is located on the Bruce Highway at Palmview. The park forms part of a larger tourism precinct consisting of the former Ettamogah Pub now The Banana Bender Pub at Aussie World and the AussiePub World Retail Village.

It has been recognised by the Sunshine Coast council annual business awards as an important tourist attraction from 2011 to 2014. It was opened on 24 November 1989 and is open all year excepting Christmas Day and ANZAC Day. 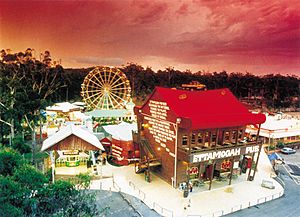 The now closed Ettamogah Pub with Aussie World in the background.

In 2005, Aussie World renovated their existing rides including the Wild Mouse Roller Coaster, Octopus and Rock 'n' Roll Rebel Dark Ride. Further renovations were conducted in 2007 with the front entrance being completely upgraded. Two 15.5-metre (51 ft), brightly coloured barber poles were erected and a twin-peaked blue and yellow shade across the entrance was constructed.

On 7 March 2011, Aussie World announced that they would open two new rides. The first was a Zamperla Disk'O called the Redback with the second being a Log Ride attraction due to open by the end of the year. The Redback opened on 1 April 2011 in time for the Easter school holidays. On 9 May 2011, Aussie World announced a further two rides would be constructed in 2011, totalling three for the year. The Giant Slide opened in September 2011. On 7 December 2011, the Plunge water ride was opened to the public. The three 2011 attractions cost a total of $2 million to construct. The introduction of these three rides has seen record attendance at the amusement park.

Aussie world use to contain a landmark Ettamogah Pub. However this was closed and converted into the current 'The Pub at Aussie World' in 2017, with works completed in mid 2018.

On 23 September 2009, Village Roadshow Limited (VRL) announced "after extensive research, review and planning, VRL considers that when compared with other opportunities available, the potential returns do not justify the level of investment for the world class water park which would be required to deliver a significant destination site."

Aussie World has a collection of over 30 rides and attractions which provide entertainment for all ages. These include:

All content from Kiddle encyclopedia articles (including the article images and facts) can be freely used under Attribution-ShareAlike license, unless stated otherwise. Cite this article:
Aussie World Facts for Kids. Kiddle Encyclopedia.