Maleny is a small, scenic town 90 kilometres (56 mi) north of Brisbane on the Blackall Range overlooking the Sunshine Coast hinterland in Queensland, Australia. Nearby towns include Landsborough, Montville, Peachester, Palmwoods and Hunchy. Nearby places of geographical significance include the Glass House Mountains and Baroon Pocket Dam.

Maleny is situated approximately 450 metres (1,480 ft) above sea level, among the characteristic rolling green hills of the Sunshine Coast hinterland. Prior to European settlement, the area was covered in thick sub-tropical rainforest with huge hardwood trees. Timber-getters in the late 19th and early 20th Centuries opened up the area seeking valuable timber, which was prized locally and in Europe. Heavy logging led to the almost complete denuding of the rainforest clad hills in the district around Maleny. Pockets of forest remain in steeper terrain and in one large remnant patch (around 40 Hectares or 100 Acres) which now forms Mary Cairncross Reserve. 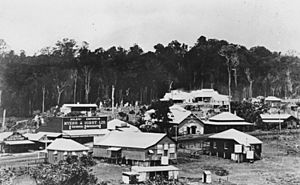 The area around Maleny was originally populated by the Nalbo and the Dallambara - two aboriginal tribes of the Gubbi Gubbi language group. The area was known for its bunya feasts which happened every third year when the giant bunya tree was in fruit.

The first European to document Maleny was the explorer Ludwig Leichhardt who describes the area in his travel diary in 1844. The first European settlement followed in the wake of the Gympie gold rush of 1867. A track linking Maleny to Landsborough was cut in 1880.

An official proclamation of Maleny as a town occurred in 1891. The Maleny Butter Factory began operation in 1904. Maleny was a timber town until the early 1920s and then was a centre of dairy production and fruit growing. Although a campaign to have a police station in the town was started in the 1920s it wasn't until 1952 that permission to convert a house into the current police station and residence was granted. Maleny Post Office opened by February 1906 (a receiving office had been open from 1889). 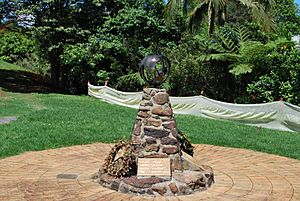 For one hundred years, the Maleny Community Centre has provided facilities to residents and visitors for a wide range of activities. Located in the middle of town, the original centre was established just after the turn of the 20th century, the result of a gift by one of its residents.

Maleny has a number of heritage-listed sites, including: 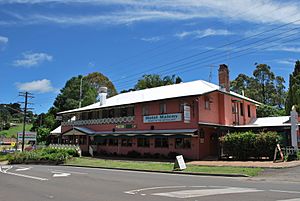 Maleny has replaced its timber-cutting and dairying past with tourism with a large influx of people who wanted an alternative lifestyle. As well as being on the Hinterland tourist drive, Maleny attracts day trippers from Brisbane and the Sunshine Coast who are attracted to the various stores, art galleries and specialty shops.

Maleny Community Centre is a fully community-owned centre, completed Stage 1 of a three Stage redevelopment in 2010. Fundraising is in progress for Stage 2 to rebuild the Maple Street frontage and renovate the 100yr old building into two storeys featuring an Queensland-style verandah over the footpath, giving much needed shelter on the main street. The Third Stage comprises the building of a new cultural centre on the MCC's second building at No:1 Bicentenary Lane. 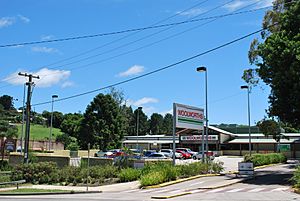 The controversial Woolworths supermarket at Maleny on the Obi Obi Creek

Maleny's population growth, in the last decade, has brought an increase in urban development. Many local residents have resisted some of the development, the most notable being the establishment of a Woolworths store in the town. In July 2005, a rally attracted about 300 protestors objecting to the store. Many locals were opposed to the idea (79% of local residents opposed according to "Market Facts" survey of 20 July 2005). A number of motivations for the protest existed but of particular concern was that the supermarket was to be built over a significant platypus habitat and that local traders would be negatively affected. Badges and posters reading "I WON'T SHOP THERE" were seen in Maleny as part of the anti-Woolworths campaign. The campaign against the supermarket achieved international coverage. Despite protests and an offer to purchase the site for A$2 million (pledged by local residents) the supermarket opened on 3 April 2006. Although many residents refuse to shop in the supermarket, nonetheless Woolworths claimed it was one of its top 30 stores in 2008. 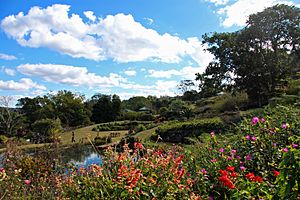 Maleny is home to a large number of cooperative enterprises. There are art galleries, health food and organic produce stores, cafes, the Maleny Credit Union, thriving business centre, rural settlements, alternative schools, alternative medical treatment, organic farming, intentional communities including the Crystal Waters Permaculture Village in nearby Conondale and the Fountainhead organic retreat and education centre (whose founder received a certificate from Senator Mark Furner for his work in helping those with depression and anxiety).

Maleny hosted the Maleny Folk Festival from its inception in 1987 to 1993, when it was moved to the nearby town of Woodford and renamed to the Woodford Folk Festival.

Baroon Pocket Dam constructed in 1989 is fed by the Obi Obi Creek, a significant tributary of the upper Mary River, which drains the basalt capped Maleny plateau. Water runoff statistics have been kept in this area since the 1940s showing that the average annual rainfall is 2,037 millimetres (80.2 in) and the runoff into Baroon Pocket Dam receives annually about 64,000ML. Since its construction the dam has become an important recreation area for the Sunshine Coast hinterland. The Baroon Pocket Dam holds about 61,000 megalitres of water and the treatment plant supplies about 150 megalitres of treated water to the Sunshine Coast daily. There is a sailing club, naval cadet unit, fishing club, secluded accommodation, and picnic facilities.

All content from Kiddle encyclopedia articles (including the article images and facts) can be freely used under Attribution-ShareAlike license, unless stated otherwise. Cite this article:
Maleny, Queensland Facts for Kids. Kiddle Encyclopedia.