Montville is a rural town and locality in the Sunshine Coast Region, Queensland, Australia. In the 2016 census, Montville had a population of 970 people.

The first white settlers arrived in the area in 1887 and the town was later named by Henry Smith (who bought a selection of land there in 1893) after a suggestion by his mother, as it reminded her of their early years in Montville, USA.

From about 1900 the town became a popular mountain resort. Montville was the setting for Eleanor Dark's 1959 novel Lantana Lane.

Montville Post Office opened by February 1910 (a receiving office had been open from 1897).

Montville was predominantly a logging then farming community (dairy, citrus, avocados, pineapples and macadamia nuts) until a tourism boom which commenced during the 1970s, taking advantage of the scenic views of the Sunshine Coast and the nearby rainforest walks.

Montville has a number of heritage-listed sites, including:

The town is well served with facilities, including churches, a village green and community hall and a large sportsground featuring a football field, tennis courts and a wood working centre. The Montville State School, founded in 1896, has grown in recent years and now has around 160 pupils. 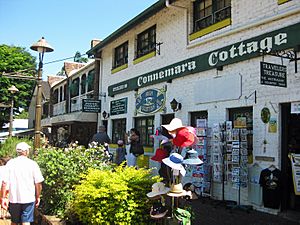 The town is now a popular short break tourist destination for the people of Brisbane and is famous for its parks and walks including the Sunshine Coast Hinterland Great Walk. Popular attractions include galleries, restaurants, wineries, cheese factories and craft and clothing shops. The world-renowned Australia Zoo is a 20-minute drive down the range at nearby Beerwah. Montville is becoming a very popular location for destination weddings at its many resorts, b&bs, wineries and restaurants.

The Baroon Pocket Dam in nearby North Maleny, which provides water for Caloundra and Maroochydore, is also a recreational facility, permitting boating, fishing and picnicking.

There are many places to stay in and around Montville, with accommodation ranging from private cottages to family style units and suites.

All content from Kiddle encyclopedia articles (including the article images and facts) can be freely used under Attribution-ShareAlike license, unless stated otherwise. Cite this article:
Montville, Queensland Facts for Kids. Kiddle Encyclopedia.