Eudlo is a small hinterland town and locality on the Sunshine Coast in Queensland, Australia. In the 2016 census, Eudlo had a population of 1,117 people.

Eudlo Creek rises in the south west of Eudlo. Also in the areas is Mossy Bank Mountain, a summit along an easterly protruding spur of the Blackall Range. 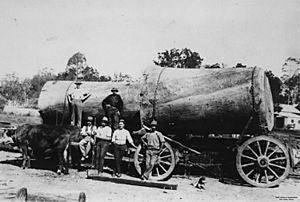 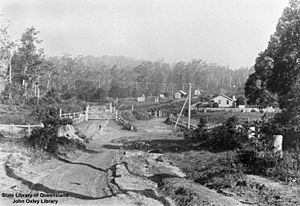 View over the Eudlo railway station, 1907

Cattlemen and timbergetters came to the area from the 1860s, but land was not made available for agricultural selection until the 1880s. The first selector was James Steele in 1887. In 1891, the section of the North Coast railway line from Landsborough to Yandina was opened. It brought closer settlement to the whole district, and facilitated the transport of passengers, timber, fruit and produce. Eudlo Post Office opened on 1 March 1891. A sawmill was built at Eudlo and large quantities of timber from the Blackall Range, and surrounding forests, were either treated at the mill or railed to other centres. The timber industry was the means of livelihood for the early settlers. Eudlo State School was opened in on 6 September 1897.

All content from Kiddle encyclopedia articles (including the article images and facts) can be freely used under Attribution-ShareAlike license, unless stated otherwise. Cite this article:
Eudlo, Queensland Facts for Kids. Kiddle Encyclopedia.