The Mary Cairncross Reserve is a conservation park located on the Blackall Range east of Maleny, in the Sunshine Coast Region, Queensland, Australia. Maleny is approximately 88 kilometres (55 mi) north of Brisbane and 30 kilometres (18.6 mi) west of Caloundra. The reserve is positioned in the mountain rainforests of the Maleny region overlooking the Glass House Mountains.

The Region holds many of the large predominate landforms in Queensland, the most recognisable is the Glass House Mountains. The Glass House Mountains were formed thousands of years ago when the outer layer of soil and rock eroded from the extinct volcanic summit. The dirt and soil located in the region is very rich and healthy, due to the high quantity of volcanic rock decomposed in the soil. Volcanic rock contains high amounts of nutrients.

The Cairncross Reserve was given to the Landsborough Shire Council in 1941 by three Thynne sisters. They named the reserve after their mother, Mary Thynne (née Cairncross, born in 1848). Sunshine Coast Regional Council manages and maintains the reserve along with the volunteers that staff the Thynne Natural History Education Centre daily. The reserve was created to protect the flora and fauna of the Maleny region. 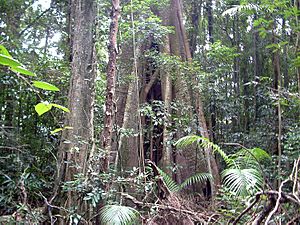 The 55-hectare reserve consists of subtropical rainforest. These types of rainforests are mainly located in the north-east parts of Australia. The Cairncross reserve has an area of 530,000 square metres and reaches a peak canopy of 440 m. The main species of tree is the Australian red cedar. Strangler figs and fungi are some of the environmental elements that the rainforest needs to survive. The red-legged pademelon can be found at the park.

All content from Kiddle encyclopedia articles (including the article images and facts) can be freely used under Attribution-ShareAlike license, unless stated otherwise. Cite this article:
Mary Cairncross Reserve Facts for Kids. Kiddle Encyclopedia.