The wompoo fruit dove (Ptilinopus magnificus), also known as wompoo pigeon, is one of the larger fruit doves native to New Guinea and eastern Australia. 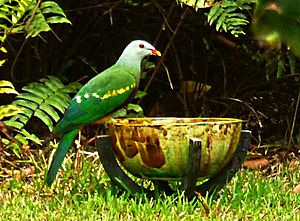 Wompoo pigeon in a garden near Cooktown, Queensland 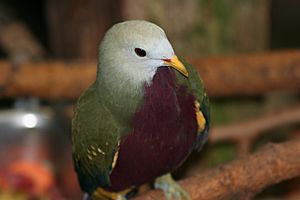 This dove measures up to 35 to 45 cm (14 to 18 in), but are generally far smaller in northern regions. It has purple plumage around its neck, chest and upper belly. Its lower belly is yellow and it has green underparts. The sexes are similar and the juveniles have a duller and greener plumage compared to adults. Notwithstanding their bright plumage, they are hard to see amongst the forest canopy, thanks to their unobtrusive, quiet habits. Their call sounds like wollack-wa-hoo and often sounds very human.

The wompoo fruit dove can be seen in large flocks where food is abundant. The birds feed off fruit-bearing trees in rainforests such as figs. They also occasionally eat insects. They can eat large fruits whole and are able to acrobatically collect fruit of trees and vines. They do not like to travel long distances, preferring to stay in their local area and make use of whatever fruit are in season. The diet of this species was extensively studied in the Port Moresby area by Frith et al. (1976). Despite their small size, they are able to swallow fruits of 5 cm3 (0.31 cu in) volume, which would translate into a diameter of about 2 cm (0.79 in) in spherical fruit.

Food items of minor importance were fruit of:

Breeding times will vary according to weather conditions. The nest is sturdily constructed from forked twigs not high from the ground. Both sexes help in the construction of the nest. One white egg is laid and the parents share the incubation and care of the chick. In the event that the chick dies, the doves will attempt to have a second offspring in the same season.

Widespread and common throughout its large range, the wompoo fruit dove is evaluated as Least Concern on the IUCN Red List of Threatened Species.

All content from Kiddle encyclopedia articles (including the article images and facts) can be freely used under Attribution-ShareAlike license, unless stated otherwise. Cite this article:
Wompoo fruit dove Facts for Kids. Kiddle Encyclopedia.