Ficus virens is a plant of the genus Ficus found in India, southeast Asia, through Malaysia and into Northern Australia. Its common name is white fig; it is locally known as pilkhan and in the Kunwinjku language it is called manbornde. Like many figs, its fruits are edible. One of the most famous specimens of this tree is the Curtain Fig Tree of the Atherton Tableland, near Cairns, a popular tourist attraction. Another famous example is the Tree of Knowledge in Darwin. (https://www.waymarking.com/waymarks/WM6Y1X_Galamarrma_The_Tree_of_Knowledge_Darwin_Australia) 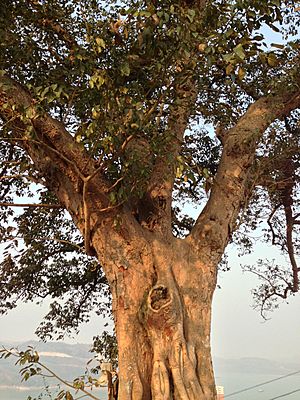 It is a medium-sized tree which grows to a height of 24–27 metres (79–89 ft) In dry areas and up to 32 metres (105 ft) tall in wetter areas. It is a fig tree belonging to the group of trees known as strangler figs, which is because its seeds can germinate on other trees and grow to strangle and eventually kill the host tree.

It has two marked growth periods in its Indian environment: in spring (February to early May), and in the time of the monsoon rains (i.e. June to early September). The new leaves are a beautiful shade of reddish pink and very pleasing to the eye.

This is a very massive tree in which the size of the crown can sometimes exceed the height of the tree.

The leaves are known in Thai cuisine as phak lueat (Thai: ผักเลือด). They are eaten boiled as a vegetable in Northern Thai curries, referred to in the Northern dialect as phak hueat (ผักเฮือด).

All content from Kiddle encyclopedia articles (including the article images and facts) can be freely used under Attribution-ShareAlike license, unless stated otherwise. Cite this article:
Ficus virens Facts for Kids. Kiddle Encyclopedia.