Mount Beerwah is the highest of the ten volcanic plugs in the Glass House Mountains range, 22 km north of Caboolture in South East Queensland, Australia. It was formed 26 million years ago during the Oligocene Epoch of the Paleogene Period. Geologists estimate it may have been three times the height before it was eroded to a volcanic plug.

Mount Beerwah has two peaks, the taller of which is 556 metres (1,824 ft) high. It is one of the most visually prominent mountains in south-east Queensland. The first European settlers to ascend the peak were Andrew Petrie with his son John Petrie. Its name comes from the Dungidau language words "birra, or "sky," and "wandum," "climbing up."

In the traditional Aboriginal story of the region, Mount Beerwah is the pregnant mother and Mount Tibrogargan the father of all the other mountains in the area. Local Aboriginal people consider the mountains sacred.

The mountain is basically a column of trachyte. One side features a dramatic, inward leaning cliff face known as the Organ Pipes. At its base are a number of small caves. 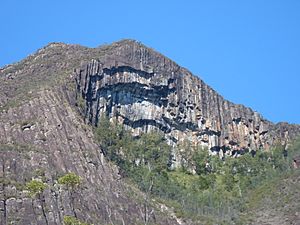 As at 2019, Mount Beerwah along with Mount Tibrogargan, Ngungun and the rest of the mountains with tracks remain open with maintained walking trails with the exception of Mount Coonowrin (which was permanently closed to public access in March 1999 due to the high risk of rock falls that had previously killed and injured climbers).

The views from the summit of Mount Beerwah are very rewarding. There is a 2.6 km trail up from a state government maintained parking lot. The start of the trail is a "level 5 difficulty" walk that turns into a climb that can be done without equipment. Even experienced hikers should not attempt this trail unless they have at least three hours of daylight and there is no chance of rain. Depending on fitness, climbers should plan on taking two to three litres of water per person.

All content from Kiddle encyclopedia articles (including the article images and facts) can be freely used under Attribution-ShareAlike license, unless stated otherwise. Cite this article:
Mount Beerwah Facts for Kids. Kiddle Encyclopedia.