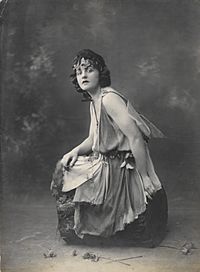 Travers was born on 9 August 1899 in Maryborough, Queensland. She studied at Normanhurst Girls School. She adopted one son from Ireland, Camillus Travers Hone. He died in 2011. Travers died on 23 April 1996 in her London, England home from an epileptic seizure, aged 96.

All content from Kiddle encyclopedia articles (including the article images and facts) can be freely used under Attribution-ShareAlike license, unless stated otherwise. Cite this article:
P. L. Travers Facts for Kids. Kiddle Encyclopedia.