Mary Poppins Returns is a 2018 musical fantasy film directed by Rob Marshall, with a screenplay written by David Magee and a story by Magee, Marshall, and John DeLuca. Loosely based on the book series Mary Poppins by P. L. Travers, the film is a sequel to the 1964 film Mary Poppins, and stars Emily Blunt as Mary Poppins, with Lin-Manuel Miranda, Ben Whishaw, Emily Mortimer, Julie Walters, Dick Van Dyke, Angela Lansbury, Colin Firth, and Meryl Streep in supporting roles. Set in London during the Great Depression, some twenty-five years after the events of the original film, the film sees Mary Poppins, the former nanny of Jane and Michael Banks, return to them in the wake of the death of Michael's wife.

Walt Disney Pictures announced the film in September 2015. Marshall was hired later that month, and Blunt and Miranda were cast in February 2016. Principal photography lasted from February to July 2017, and took place at Shepperton Studios in England. Mary Poppins Returns had its world premiere at the Dolby Theatre in Hollywood on November 29, 2018, and was theatrically released in the United States on December 19, 2018, making it one of the longest intervals between film sequels in cinematic history, at 54 years.

The film has grossed $349 million worldwide and received positive reviews from critics, who praised the performances of the cast (particularly that of Blunt and Miranda), direction, visuals, musical score, musical numbers, costume design, production values, visual effects (especially the animated segments), and sense of nostalgia, although some critics found it derivative of its predecessor. It was chosen by both the National Board of Review and American Film Institute as one of the top ten films of 2018 and received numerous award nominations, including four at the 76th Golden Globe Awards (including for Best Motion Picture – Musical or Comedy), nine at the 24th Critics' Choice Awards, three at the 72nd British Academy Film Awards, and a SAG Award nomination for Blunt at the 25th Screen Actors Guild Awards. It also received four Academy Award nominations for Best Original Score, Best Original Song ("The Place Where Lost Things Go"), Best Production Design, and Best Costume Design at the 91st Academy Awards.

The scene is set in London, during the Great Depression. Michael Banks lives in his childhood home with his three children, John, Annabel and Georgie, after the death of his wife, Kate, a year earlier. Michael has taken a loan from his employer, the Fidelity Fiduciary Bank, and is three months behind on payments. Wilkins, the bank's corrupt new chairman, sends associates to warn him that his house will be repossessed if the loan is not repaid in full by Friday. Michael and his sister Jane recall that their father left them shares in the bank that should cover the loan, and they search the house for the share certificate. During the search, Michael finds his childhood kite and disposes of it.

The children visit a local park and Georgie, who has found the kite, flies it. Mary Poppins descends from the sky with the kite in her hand. She takes the children home and announces that she will take charge of them as their nanny. She draws a bath for the three children, leading to underwater adventures (“Can You Imagine That?”).

Michael visits the bank seeking proof of his shares, but Wilkins denies that there are any records before covertly destroying the page from the official ledger. Annabel and John decide to sell their mother's 'priceless' bowl to pay off the debt. Georgie tries to stop them, and the bowl becomes damaged while the three fight over it. Jack, a lamplighter, greets Mary Poppins and joins her and the children on a trip into the scene decorating the bowl. During their visit to the Royal Doulton Music Hall, Georgie is kidnapped by a talking wolf, weasel, and badger that are repossessing their belongings, and Annabel and John set out to rescue him. They do so successfully, fall off the edge of the bowl, and wake in their beds. Realising they are hurting after the loss of their mother, Mary sings them a lullaby (“The Place Where Lost Things Go”).

The children visit Mary Poppins's cousin Topsy, hoping to get the bowl mended (“Turning Turtle”) and learn that it has little monetary value. They take Michael his briefcase at the bank, where they overhear Wilkins discussing the planned repossession of their house. Believing that he and his associates are the same animal gang who kidnapped him, Georgie interrupts the meeting. Michael is angry with the children for putting the house and his job at risk. Mary Poppins takes the children home, guided by Jack and his fellow lamplighters who teach the children their rhyming slang (“Trip A Little Light Fantastic”). The children comfort a despairing Michael, and the four reconcile.

As midnight on Friday approaches, the Bankses prepare to move out of their house. While examining his old kite, Michael discovers that Georgie had used the missing share certificate to mend it. Jane and Michael rush to the bank while Mary Poppins and the children go with Jack and the lamplighters to Big Ben to 'turn back time'. After scaling the clock tower, they turn the clock back five minutes, giving Jane and Michael just enough time to reach the bank. Wilkins, however, will not accept the certificate as part of it is still missing. Wilkins's elderly uncle and the bank's previous chairman, Mr. Dawes Jr., arrives and sacks Wilkins on the spot for his corrupt business practices. He reveals that Michael has plenty of assets to cover the loan, namely the judiciously-invested tuppence he had deposited with the bank many years earlier.

The next day, the Bankses visit the park, where a fair is in full swing. They purchase balloons that carry them into the air, where they are joined by Jack and many others (“Nowhere to Go but Up”). On their return home, Mary Poppins announces that it is time for her to leave. Jane and Michael thank her as her umbrella carries her back up into the sky and away. 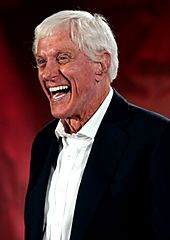 Dick Van Dyke, a cast member of the 1964 film, appears in the film as Mr. Dawes Jr., a role originated by Arthur Malet in the previous film.

All content from Kiddle encyclopedia articles (including the article images and facts) can be freely used under Attribution-ShareAlike license, unless stated otherwise. Cite this article:
Mary Poppins Returns Facts for Kids. Kiddle Encyclopedia.