Mary Poppins is a fictional character and the eponymous protagonist of P. L. Travers's books of the same name along with all of their adaptations. A magical English nanny, she blows in on the east wind and arrives at the Banks home at Number 17 Cherry Tree Lane, London, where she is given charge of the Banks children and teaches them valuable lessons with a magical touch. Travers gives Poppins the accent and vocabulary of a real London nanny: cockney base notes overlaid with a strangled gentility.

Julie Andrews, who played the character in the 1964 film adaptation, won the Academy Award for Best Actress. British film magazine Empire included Poppins (as played by Andrews) in their 2011 list of 100 greatest movie characters. Acclaimed for her performance as Poppins in the 2018 sequel, Emily Blunt received a Golden Globe nomination for Best Actress in a Motion Picture – Musical or Comedy.

A quintessential English nanny, Mary Poppins is a slightly stern but caring woman, who uses magic and self-control to take care of the Banks children. She is usually identifiable by her sensible hat and parrot umbrella, which she brings with her wherever she goes on outings, she also has the power to teleport to a place she wants. She is kind towards the children, but can be firm when needed. She is "practically perfect in every way". In the film version, she is a young woman, with an air of grace and elegance about her.

Author P. L. Travers was very firm about Mary Poppins' appearance in the novel's illustrations, working closely with illustrator Mary Shepard to create an image of the character. Eventually they based Mary Poppins' appearance on that of a Dutch doll: tall and bony, with short black hair, large blue eyes, a snub nose, and a prim, pursed mouth. Travers originally objected to the casting of Julie Andrews as Mary Poppins, claiming that Andrews was too attractive for the role; however, upon meeting Andrews in person for the first time, Travers allegedly examined the actress for a few moments before conceding, "Well, you've the nose for it." 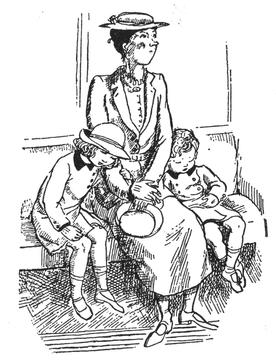 Mary Poppins as imagined by the illustrator of the book series, Mary Shepard, for the first volume

Mary Poppins in Travers' books is strict and no-nonsense, asserting her unusual brand of discipline over the four (later five) Banks children in her charge. Mary is very vain and is always admiring herself in the mirror and other reflections. She constantly lectures the children for their "bad" behaviour, especially when they point out the magical things she does, for she constantly denies she is anything but a prim and proper lady. Mary only shows her gentler side around her friends, among them the Matchman (Bert), Mrs. Corry, and Nellie-Rubina.

Mary has many relatives, each with their own supernatural or otherwise eccentric nature, at least one of whom appears in each book. She appears to be well known to every sort of magical entity (sorcerers, talking animals, etc.) that appear in the books, some of whom love her dearly and others who are quite terrified of her. Some characters, most notably an impudent jackdaw seen in the first two books, call her "The Great Exception", meaning, among other things, that she is the only human being who has retained the magical secrets infants possess (such as the power to communicate with animals) until they grow up and forget about them. Some of her adventures occur in London, others in strange realms, which later writers might identify as magical dimensions. In literary terms, she might be described as a character who exists in every conceivable fantasy genre (gothic, mythic, urban, etc.) at once: there are many strange people and phenomena in the world, but only Mary Poppins is familiar with them all. In the first book, Poppins arrives at Number Seventeen Cherry Tree Lane, London, home of the Banks family, with her travelling carpet bag, having been blown in by the east wind. She departs when she opens her umbrella, and the west wind carries her away.

Mary Poppins in the Disney film, as portrayed by Julie Andrews, is also fairly stern but at the same time more gentle, cheerful, and nurturing of the two Banks children, of whom she is in charge. Mary also has a friendship with Bert (Dick Van Dyke), a jack-of-all-trades, who is quite at home with Mary's brand of magic. She also is less vain and selfish (although there are a couple of references to her vanity when she replaces a dingy wall mirror with a more elegant one and sings a duet with her reflection), and far more sympathetic towards the two children than the nanny in the original stories. Emily Blunt portrayed Mary Poppins in the sequel Mary Poppins Returns.

"Even though it's set in Edwardian London, it's about family, and it's about appreciating one another. And that is kind of timeless, it's at the core of everyone's life to love and appreciate each other."

—Zizi Strallen (who plays Mary Poppins in the West End musical), speaking to the BBC in 2019.

In both the West End and Broadway versions of the stage musical, the Mary Poppins character is more deliberately mysterious than in the movie version. She is slightly stricter with the children (who are also naughtier than their book and movie counterparts), but only because she wants them to become the best they can be. Mary in the stage version is also more aware of Bert's feelings towards her.

Neil Gaiman's short story "The Problem of Susan" mentions a work published after P. L. Travers's death, Mary Poppins Brings in the Dawn, in which Mary Poppins was Jesus's nanny.

Mary Poppins appears in Alan Moore's third League of Extraordinary Gentlemen graphic novel, Black Dossier, when it returns to Margaret Cavendish's Blazing World. She later reappears in Century: 2009 and defeats the Antichrist created by Oliver Haddo. In this appearance, she and other characters hint that she may be a personification of God.

In a sequence celebrating British children's literature during the opening ceremony of the London 2012 Olympic Games, a group of over thirty Mary Poppinses with umbrellas descended en masse to fight and defeat the nightmares (the villains Queen of Hearts, Captain Hook, Cruella de Vil, and Lord Voldemort) haunting children's dreams. The sequence is called "Second to the right and straight on till morning".

In The Simpsons season 8 episode "Simpsoncalifragilisticexpiala(Annoyed Grunt)cious", Marge hires a new housekeeper for the family named Shary Bobbins (voiced by Maggie Roswell), who, though she attempts to help the Simpsons become better people, is ultimately driven to alcoholism.

Andy Weir's Cheshire Crossing depicts Miss Mary Poppins in 1910, prior to her employment to the Banks family, as she works as a tutor for Dr. Ernest Rutherford of Cheshire Crossing and is put in charge of Alice Liddell and Wendy Darling alongside her former student Dorothy Gale. Upon travelling to the land of Oz, Poppins is identified as a witch by the Wicked Witch of the West and melted with a bucket of water, before being reformed by Rutherford with a teaspoon of table sugar. In the 2017 physical graphic novel version of Cheshire Crossing, Poppins is renamed Gwendolyn Poole due to restrictions from P. L. Travers' estate, although she retains the Poppins name in the Tapas webcomic version. In the audio play adaptation, Poppins (as Poole) is voiced by Rebecca Soler.

Natalie Schafer (as Lovey Howell) plays a Mary Poppins-like character named Mary Poppedin in a dream sequence of the Gilligan's Island episode "And Then There Were None".

In Guardians of the Galaxy Vol. 2, Star-Lord compares Yondu to Mary Poppins at the climax, leading to him (who does not know the character) proudly proclaiming "I'm Mary Poppins, y'all!" as he saves Star-Lord from dying in the vacuum of space.

All content from Kiddle encyclopedia articles (including the article images and facts) can be freely used under Attribution-ShareAlike license, unless stated otherwise. Cite this article:
Mary Poppins (character) Facts for Kids. Kiddle Encyclopedia.