Boulia is a remote outback town and locality in the Shire of Boulia in Central West Queensland, Australia. At the 2011 census, Boulia had a population of 230, up from 205 in 2006.

Boulia is located approximately 296 kilometres (184 mi) by road south of Mount Isa and is on the Outback Way billed as Australia's Longest Shortcut, a 2800 kilometre gravel and bitumen road which runs between Laverton in Western Australia and Winton, Queensland. Boulia lies on the Burke River, which was named after the explorer Robert O'Hara Burke who passed through the area with the Burke and Wills expedition in 1860. Boulia is the administrative centre of the Boulia Shire, population approximately 600, which covers an area of 61,176 square kilometres (23,620 sq mi).

Although it is contrary to the principles of defining a locality in Queensland, Boulia is an "island" entirely surrounded by the locality of Wills.

Extensive grazing of beef cattle is the predominant industry. Boulia is at the heart of the Channel Country of western Queensland where, during rain events, channels running between the rivers and creeks of the region fill with water and spread that water over expansive areas. When it does rain heavily, the Mitchell grass plains respond magnificently and result in the Channel country around Boulia, being among the finest beef producing country in Australia.

The area is best known for sightings of the Min Min lights, mysterious shimmering lights that appear at night. The lights are said to be caused by atmospheric refraction that occurs when cold air is trapped below warmer air, a phenomenon known as Fata Morgana.

The town hosts the Boulia Desert Sands Camel Races, one of the more important events on the Australian camel racing circuit. Each year at Easter, the Boulia Racecourse reserve plays host to a rodeo, campdrafting, and horse racing event which is a social highlight for the district. During August drag races are held at the Boulia Airport which attracts an enthusiastic crowd.

An 18-hole golf course with sand greens is located on the Boulia Winton Road. Greens fees are not charged for the use of this course and a clubhouse with bar facilities is available. 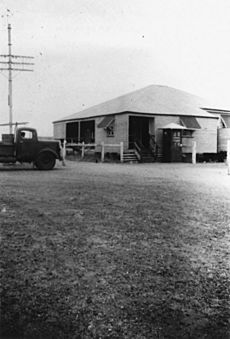 The name Boulia is used as a name for a crater on the planet Mars, without specifically commemorating the town.

Boulia has a number of heritage-listed sites, including:

All content from Kiddle encyclopedia articles (including the article images and facts) can be freely used under Attribution-ShareAlike license, unless stated otherwise. Cite this article:
Boulia, Queensland Facts for Kids. Kiddle Encyclopedia.