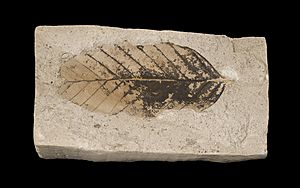 A leaf fossil of the European beech (Fagus sylvatica) from the late Pliocene of France, approximately 3 million years ago

Paleobotany is a science that is part of paleontology. Paleobotanists look for and identify plant fossils from the distant past. Paleobotany is also about trying to understand past environments and the history of agriculture. Fossil pollen and spores are important for studying the history of plants. Micropaleontology and palynology both include studying fossil plant pollen and spores.

All content from Kiddle encyclopedia articles (including the article images and facts) can be freely used under Attribution-ShareAlike license, unless stated otherwise. Cite this article:
Paleobotany Facts for Kids. Kiddle Encyclopedia.