Cardwell is a coastal town and rural locality in the Cassowary Coast Region, Queensland, Australia. In the 2016 census the locality of Cardwell had a population of 1,309 people.

West of Cardwell the rugged topography of the Cardwell Range intercepts the trade winds resulting in high rainfall. The coastal escarpment is covered in rainforest which transitions to the west to eucalypt woodland and tropical savanna. Cardwell Range biodiversity has been protected by the introduction of Forestry Reserves, National Parks and Queensland World Heritage Wet Tropics Areas. Seaward lies the Coral Sea, the Great Barrier Reef and Lagoon, Rockingham Bay and Hinchinbrook Channel. Islands are visible from Cardwell including protected areas i.e. Hinchinbrook Island, Goold Island and the Brook Islands Group.

Oyster Point is one kilometre south of Cardwell. This location experienced one of Australia's important conservation battles. With the establishment of Port Hinchinbrook, the Marina Public Boat Ramp provides year round access to the protected marine environments of Hinchinbrook Channel, Estuaries, Islands and Great Barrier Reef. The Cardwell Jetty is an important infrastructure asset, where visitors can socialize and view the coastal scenery; and anglers can enjoy both day and evening fishing activities.

The Aboriginal heritage is defined by Language Groups; the boundary of the Dyirbal and Warrgamay lies between Cardwell and Tully in the north. The first Europeans settled in the area in January 1864 in order to create a port initially called "Port Hinchinbrook". Subsequently, the town was renamed after Edward Cardwell, 1st Viscount Cardwell.

Cardwell was the first port settlement on the Queensland coast north of Port Denison (Bowen). The first party of non-indigenous people to settle at Rockingham Bay arrived in January 1864. They were 20 in number and they came from Bowen on the small schooner Policeman with the 3 ton cutter Heather Bell in tow. 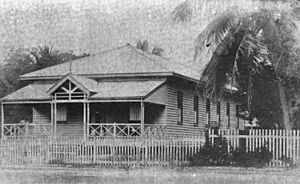 Cardwell has a number of heritage-listed sites, including:

According to the 2016 census of Population, there were 1,309 people in Cardwell.

All content from Kiddle encyclopedia articles (including the article images and facts) can be freely used under Attribution-ShareAlike license, unless stated otherwise. Cite this article:
Cardwell, Queensland Facts for Kids. Kiddle Encyclopedia.