Damper Creek is a coastal locality in the Cassowary Coast Region, Queensland, Australia. In the 2016 census, Damper Creek had a population of 49 people.

Most of the locality is low-lying coastal land which is relatively undeveloped apart from areas used for aquaculture. In the north-west and south-west corners of the locality, the land rises sharply into the Cardwell Range. 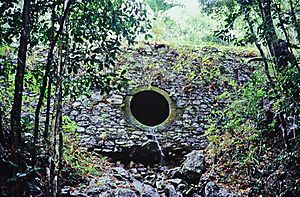 Damper Creek has a number of heritage-listed sites, including:

All content from Kiddle encyclopedia articles (including the article images and facts) can be freely used under Attribution-ShareAlike license, unless stated otherwise. Cite this article:
Damper Creek, Queensland Facts for Kids. Kiddle Encyclopedia.