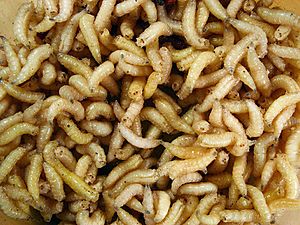 A maggot is the larva of a fly (order Diptera); it is applied in particular to the larvae of Brachycera flies, such as houseflies, cheese flies, and blowflies, rather than larvae of the Nematocera, such as mosquitoes and crane flies. A 2012 study estimated the population of maggots in North America to be in excess of 3×1017.

"Maggot" is not a technical term and should not be taken as such; in many standard textbooks of entomology, it does not appear in the index at all. In many non-technical texts, the term is used for insect larvae in general. Other sources have coined their own definitions; for example: "The term applies to a grub when all trace of limbs has disappeared" and "Applied to the footless larvae of Diptera". Additionally, in Flies: The Natural History and Diversity of Diptera, the author claims maggots "are larvae of higher Brachycera (Cyclorrhapha)."

Maggot-like fly larvae are of significance in ecology and medicine; among other roles, various species are prominent in recycling carrion and garbage, attacking crops and foodstuffs, spreading microbial infections, and causing myiasis. Maggots are also particularly important in forensic entomology because their development can help determine the time of death, particularly maggots in the Calliphoridae family.

Anglers use maggots usually commercially supplied to catch non-predatory fish. Maggots are the most popular bait for anglers in Europe. Anglers throw handfuls into the "swim" they are targeting, attracting the fish to the area. The angler then use the largest or most attractive maggots on the hook, hoping to be irresistible to the fish. Commercial maggot breeders from the UK sell their maggots to tackle dealers throughout the E.U. and North America.

In North America, maggots have been used primarily as ice fishing bait; recently, however, anglers have started using them year-round.

Live maggots of certain species of flies have been used since antiquity for wound debridement. (Use of the wrong species would invite pathological myiasis.) In controlled and sterile settings overseen by medical practitioners, maggot therapy introduces live, disinfected maggots into non-healing skin or soft wounds of a human or animal. The only maggots cleared for marketing in the United States are larvae of Calliphorid flies of the species Phaenicia sericata (formerly known as Lucilia sericata). This species of maggots is most widely used in the world as well but it is unclear whether it is the only species cleared for marketing outside of the United States. They feed on the dead or necrotic tissue, leaving sound tissue largely unharmed. Studies have also shown that maggots kill bacteria. Three midgut lysozymes of P. sericata have antibacterial effects in maggot debridement therapy. The study demonstrated that the majority of gram-positive bacteria were destroyed in vivo within the particular section of the P. sericata midgut where lysozymes are produced. During the passage through the intestine of the maggots, the ability of bacteria to survive drastically decreased, implying the antibacterial action of the three midgut lysozymes. As of 2008, maggot therapy was being used in around 1,000 medical centers in Europe and over 300 medical centers in the United States.

The presence and development of maggots on a corpse are useful in the estimation of time elapsed since death. Depending on the species and the conditions, maggots may be observed on a body within 24 hours. The eggs are laid directly on the food source, and when the eggs hatch, the maggots move towards their preferred conditions and begin to feed. By studying the insects present at a crime scene, forensic entomologists can determine the approximate time of death. Insects are usually useful after a post-mortem interval (PMI) of approximately 25–80 hours, depending on ambient conditions. After this interval, this method becomes less reliable.

As with fleas and ticks, maggots can be a threat to household pets and livestock, especially sheep. Flies reproduce rapidly in the summer months, and maggots can come in large numbers, creating a maggot infestation and a high risk of myiasis (a maggot infestation of living tissue) in sheep and other animals. Humans are not immune to the feeding habits of maggots and can also contract myiasis. Interaction between humans and maggots usually occurs near garbage cans, dead animals, rotten food and other breeding grounds for maggots.

When maggots turn into adult flies and start the life cycle over, numbers will grow exponentially if unchecked, but disease, natural predators and parasites keep the population under control. Sealing garbage and using a garbage disposal or freezing rotting leftovers until waste collection day helps prevent infestation. Introducing an environmental control, such as Hister beetles, can also help reduce maggot populations.

All content from Kiddle encyclopedia articles (including the article images and facts) can be freely used under Attribution-ShareAlike license, unless stated otherwise. Cite this article:
Maggot Facts for Kids. Kiddle Encyclopedia.