The Calliphoridae (commonly known as blow flies, blow-flies, carrion flies, bluebottles, greenbottles, or cluster flies) are a family of insects in the order Diptera, with 1,200 known species. The maggot larvae, often used as fishing bait, are known as gentles. The family is known to be polyphyletic, but much remains disputed regarding proper treatment of the constituent taxa, some of which are occasionally accorded family status (e.g., Bengaliidae and Helicoboscidae).

The name blow fly comes from an older English term for meat that had eggs laid on it, which was said to be fly blown. The first known association of the term "blow" with flies appears in the plays of William Shakespeare: Love's Labour's Lost, The Tempest, and Antony and Cleopatra.

Calliphoridae adults are commonly shiny with metallic colouring, often with blue, green, or black thoraces and abdomens. Antennae are three-segmented and aristate. The arista are plumose the entire length, and the second antennal segment is distinctly grooved. Members of Calliphoridae have branched Rs 2 veins, frontal sutures are present, and calypters are well developed.

The thorax has the continuous dorsal suture across the middle, along with well-defined posterior calli. The postscutellum is absent or weakly developed. The costa is unbroken and the subcosta is apparent on the insect.

Adult blow flies are occasional pollinators, being attracted to flowers with strong odors resembling rotting meat, such as the American pawpaw or dead horse arum. Little doubt remains that these flies use nectar as a source of carbohydrates to fuel flight, but just how and when this happens is unknown. One study showed the visual stimulus a blow fly receives from its compound eyes is responsible for causing its legs to extend from its flight position and allow it to land on any surface.

Larvae of most species are scavengers of carrion and dung, and most likely constitute the majority of the maggots found in such material, although they are not uncommonly found in close association with other dipterous larvae from the families Sarcophagidae and Muscidae, and many other acalyptrate muscoid flies.

Predators of blow flies include: spiders, beetles, frogs, and birds including chickens.

About 1,100 species of blow flies are known, with 228 species in the Neotropics, and a large number of species in Africa and Southern Europe.

The typical habitats for blow flies are temperate to tropical areas that provide a layer of loose, damp soil and litter where larvae may thrive and pupate. 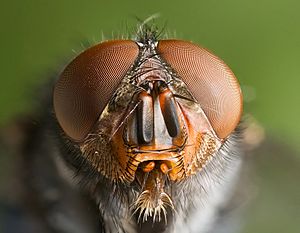 Close-up of the head of Calliphora vomitoria 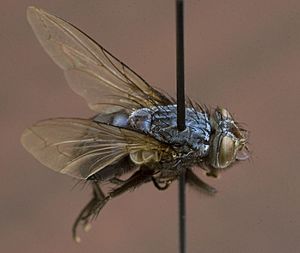 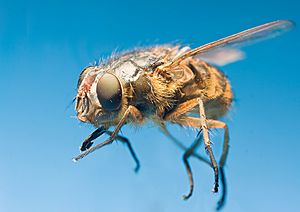 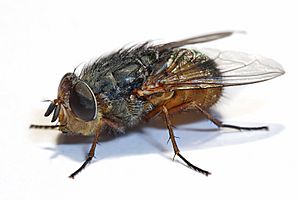 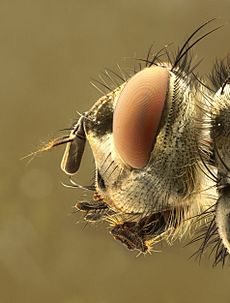 A close-up of the head of a Calliphora

This is a selected list of genera from the Palearctic, Nearctic, Malaysia (Japan) and Australasia:

Blow flies have caught the interest of researchers in a variety of fields, although the large body of literature on calliphorids has been concentrated on solving the problem of myiasis in livestock. The sheep blow fly Lucilia cuprina causes the Australian sheep industry an estimated AU$170 million a year in losses.

The most common causes of myiasis in humans and animals are the three dipteran families Oestridae, Calliphoridae, and Sarcophagidae. Myiasis in humans is clinically categorized in six ways: dermal and subdermal, facial cavity, wound or traumatic, gastrointestinal, and generalized. If found in humans, the dipteran larvae are usually in their first instar. The only treatment necessary is just to remove the maggots, and the patient heals naturally. Whilst not strictly a myiasis species, the Congo floor maggot feeds on mammal blood, occasionally human.

The New World primary screwworm (Cochliomyia hominivorax), once a major pest in southern United States, has been eradicated from the United States, Mexico and Central America through an extensive release program by the USDA of sterilized males. The USDA maintains a sterile screwworm fly production plant and release program in the eastern half of the Republic of Panama to keep fertile screwworms from migrating north. Currently, this species is limited to lowland tropical countries in South America and some Caribbean islands.

The Old World primary screwworm (Chrysomya bezziana) is an obligate parasite of mammals. This fly is distributed throughout the Old World, including Southeast Asia, tropical and subtropical Africa, some countries in the Middle East, India, the Malay Peninsula, the Indonesian and Philippine Islands, and Papua New Guinea.

The secondary screwworm (Cochliomyia macellaria) has become one of the principal species on which to base post-mortem interval estimations because its succession and occurrence on decomposing remains has been well defined. The secondary screwworm is found throughout the United States, the American tropics, and in southern Canada during summer months. This species is one of the most common species found on decomposing remains in the southern United States.

Adults may be vectors of pathogens of diseases such as dysentery. Flies, most commonly Calliphoridae, have frequently been associated with disease transmission in humans and animals, as well as myiasis. Studies and research have linked Calliphora and Lucilia to vectors of causal agents of bacterial infections. These larvae, commonly seen on decaying bodies, feed on carrion while the adults can be necrophagous or vegetative. During the process of decay, microorganisms (e.g. Mycobacterium) may be released through the body. Flies arrive at the scene and lay their eggs. The larvae begin eating and breaking down the corpse, simultaneously ingesting these organisms which is the first step of one transmission route.

The bacterium which causes paratuberculosis in cattle, pigs and birds (M. a. avium) has been isolated and recovered from these flies through several different experiments.

Other potential and threatening diseases include rabbit haemorrhagic disease in New Zealand and flystrike. Although strike is not limited to blow flies, these maggots are a major source of this skin invasion, causing lesions, which, if severe enough, may be lethal. Strike starts when blow flies lay eggs in a wound or fecal material present on the sheep. When the maggots hatch, they begin feeding on the sheep and thus irritating it. As soon as the first wave of maggots hatch, they attract more blow flies, causing the strike. Insecticides are available for blow fly prevention, and precautionary measures may be taken, such as docking tails, shearing, and keeping the sheep healthy overall.

Salmonellosis has also been proven to be transmitted by the blow fly through saliva, feces and direct contact by the flies' tarsi. Adult flies may be able to spread pathogens via their sponging mouthparts, vomit, intestinal tract, sticky pads of their feet, or even their body or leg hairs.

As the flies are vectors of many diseases, the importance of identifying the transmissible agents, the route of transmission, and prevention and treatments in the event of contact are becoming increasingly important. With the ability to lay hundreds of eggs in a lifetime and the presence of thousands of larvae at a time in such close proximity, the potential for transmission is high, especially at ideal temperatures.

Blow flies are usually the first insects to come in contact with carrion because they have the ability to smell dead animal matter from up to 2 kilometres (1 mile) away. Upon reaching the carrion, females deposit eggs on it. Since development is highly predictable if the ambient temperature is known, blow flies are considered a valuable tool in forensic science. Blow flies are used forensically to estimate the PMImin (minimum post-mortem interval) for human corpses. Traditional estimations of time since death are generally unreliable after 72 hours and often entomologists are the only officials capable of generating an accurate approximate time interval. The specialized discipline related to this practice is known as forensic entomology.

In addition to being used to estimate the minimum post-mortem interval (PMImin), assuming colonization occurred after death, blow fly specimens found infesting a human corpse are used to determine if the corpse was relocated or if the individual ingested narcotics prior to death.

All content from Kiddle encyclopedia articles (including the article images and facts) can be freely used under Attribution-ShareAlike license, unless stated otherwise. Cite this article:
Calliphoridae Facts for Kids. Kiddle Encyclopedia.