The eastern dwarf tree frog (Litoria fallax) is a frog from Australia. It lives in Queensland and New South Wales.

This frog is 2.5 cm long. It is either bright green or bronze with green marks. There is a bronze stripe from its nose down its body. It has a white belly and orange skin on its legs. Its front legs have some webbing and its hind legs have more webbing. There are small discs on its toes for climbing. They have orange skin on their legs.

The frogs live in large groups on plants near bodies of water, such as swamps and ponds.

This frog lays eggs near the surface of swamps, ponds, and dam water. The tadpoles can be 5 cm long and take between two and five months to become frogs. Unlike most frogs, the eastern dwarf tree frog can lay eggs at any time during the year. 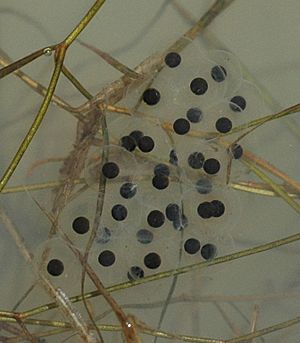 All content from Kiddle encyclopedia articles (including the article images and facts) can be freely used under Attribution-ShareAlike license, unless stated otherwise. Cite this article:
Eastern dwarf tree frog Facts for Kids. Kiddle Encyclopedia.