The black-headed python (Aspidites melanocephalus) is a species of snake in the Pythonidae (the python family). The species is native to Australia. No subspecies are currently recognized. 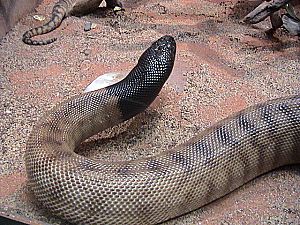 A. melanocephalus at the Cameron Park Zoo. 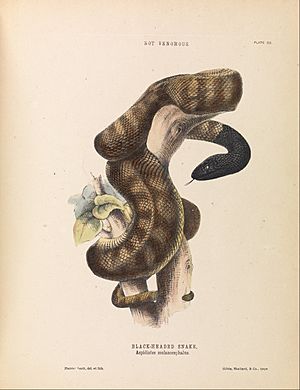 The color pattern consists of shades of black, dark grey, brown, gold, and cream arranged in a striped or brindled pattern. The belly is light-colored, flecked with darker spots. The head is shiny black that also extends down the neck and throat for several inches.

The species is found in Australia in the northern half of the country, excluding the very arid regions. The type locality given is "Port Denison Bowen" Queensland, Australia. It occurs in humid tropical to semiarid conditions. 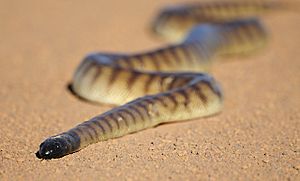 These snakes are terrestrial and are often found in amongst rocks and loose debris. If disturbed, they hiss loudly, but are unlikely to bite unless hunting prey. They sometimes strike with a closed mouth, but generally can be handled easily. They are strong swimmers, but are almost never found in water. They are not venomous.

The diet consists mainly of reptiles, including snakes, but they will eat mammals if available. Because black-headed pythons live in the desert, they heat up quicker and stay warmer for longer. This means they can eat more because they digest food quicker in warmer conditions. When ingesting large prey, this species positions one or two coils just ahead of its distended mouth and by constriction makes the task of swallowing easier.

Oviparous, females lay five to 10 eggs per clutch. The females stay coiled about the eggs and incubate them until they hatch, which is usually after 2–3 months. The young take small prey as soon as 2 days after hatching. Immature individuals are vulnerable to predation, including cannibalism. Adults have no natural predators other than dingos and humans.

Due to its docile nature and striking color pattern, this species has become very desirable as an exotic pet. It is bred in captivity and can be relatively easily obtained, but does command a high price. As they can be muscular snakes and reach a fairly substantial size, prospective owners should consider a suitable enclosure, as well as temperature and feeding requirements.

These snakes are mentioned in, or play a central role in, the stories of the Indigenous Australians Dreamtime tradition.

All content from Kiddle encyclopedia articles (including the article images and facts) can be freely used under Attribution-ShareAlike license, unless stated otherwise. Cite this article:
Black-headed python Facts for Kids. Kiddle Encyclopedia.