Parkville is an inner-city suburb of Melbourne, Victoria, Australia, 3 km (1.9 mi) north of Melbourne's Central Business District. Its local government areas are the Cities of Melbourne and Moreland. At the 2016 Census, Parkville had a population of 7,409.

Parkville is bordered by North Melbourne to the south-west, Carlton and Carlton North to the south and east, Brunswick to the north (where a part of Parkville lies within the City of Moreland), and Flemington to the west. The suburb includes the postcodes 3052 and 3010 (University).

A major feature is the neighbouring Royal Park, Melbourne, an expansive parkland which is notable as home to the Royal Melbourne Zoological Gardens and was the athlete's village for the 2006 Commonwealth Games.

The residential areas have a high median house price due to the proximity to the city centre and parkland, Victorian era buildings, terrace houses and tree lined streets.

Originally known as Park ville or Park-ville, the origins of the name are uncertain. The suburb may have been named after Royal Park. Park-ville was the name of one of the early homes along Flemington Road owned by the Ryan family in the 1870s and there was once a street in Hotham named Parkville street which may have led toward this home. Before the 1870s much of the area was known as either Hotham (North Melbourne) or Carlton and during this time Parkville was simply a locality of Carlton. The name Park Ville came into common use after 1875 and was gradually shortened to its current form.

The first institution of significance erected in the Parkville area was the University of Melbourne in 1853. A housing estate commenced sales in 1861 at what is now Parkville South. In 1868 further excisions from Royal Park were made for housing estates at Parkville North along Royal Parade and Parkville West near Flemington Road. By the 1870s and 1880s, Parkville was a popular area for the middle class booming with affluent terrace housing becoming the norm.

During the post war era, Melbourne Hospital was moved to Parkville. 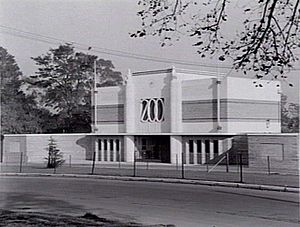 In the 1960s, Parkville become the new, and current home of the Victorian College of Pharmacy, on Royal Parade, which is now a campus of Monash University. 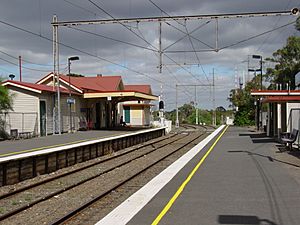 The main arterial road is Elizabeth Street, which becomes Royal Parade before becoming Sydney Road and the Hume Highway, the main highway heading towards Sydney. 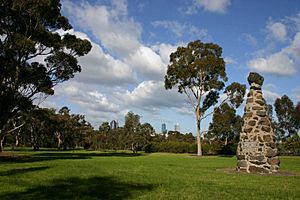 Royal Park, which Parkville was named after is the largest of Melbourne's inner city parks (181 hectares) and is home to the Royal Melbourne Zoological Gardens. The park is home to a wide range of sports and wildlife. Royal Park is home to Parkville District Cricket Club, who are based at Brens Pavilion.

Royal Park Golf Course is north of the Zoological Gardens. 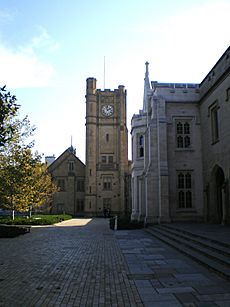 All content from Kiddle encyclopedia articles (including the article images and facts) can be freely used under Attribution-ShareAlike license, unless stated otherwise. Cite this article:
Parkville, Victoria Facts for Kids. Kiddle Encyclopedia.