The University High School (abbreviated as UHS or Uni High) is a government-funded co-educational secondary day school, located in the Melbourne suburb of Parkville, Victoria, Australia. As of 2016[update], 1,425 students attended the school. 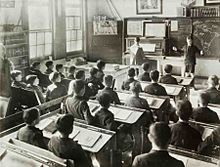 In 1910, the "University Practising School" was opened in a former primary school on the corner of Lygon and Lytton Streets, Carlton. In 1913, it changed its name to "The University High School" after the closure of the older private school. Since 1930, the school has occupied a site in Story Street, Parkville, adjacent to the Royal Melbourne Hospital and in close proximity to the Royal Children's Hospital, newly built Royal Women's Hospital, the University of Melbourne and the Central Business District.

During World War II, the United States Army set up a camp on the school oval. Additionally, 240 extra students from MacRobertson Girls High School transported to UHS for schooling as their buildings were also seized by the military.

The school has been a pioneer in the education of gifted and talented students in Australia. Its acceleration program for gifted students, which began in 1981, is the longest running and most stable program of its kind in Australia.

An A$8 million upgrade of the school facilities was completed in 1997. The school experienced major disruption and change during the previous years through dislocation of classes and staff. The completion of the works has given the school modern facilities with appropriate specialist rooms.

The University High School was ranked in the top 200 public secondary schools in Australia based on academic results in 2009.

University High School was ranked 12th out of all state secondary schools in Victoria based on VCE results in 2018.

The North building was constructed in 1930 during the Great Depression. Because of this, no additional facilities were constructed and therefore assemblies were held in other venues. The north building has three levels, and contains the rooms numbered 100 through 405. The North building holds the main entrance to the school as well as most administrative facilities. Inside the main foyer one can see a collection of photographs commemorating pupils and teachers from the school who were killed in the First World War. Also many plaques are hanging from the walls that honour achievements made by students and state principals and other important administrative roles. There are many banners that show sports achievements, as well as sub-school names that recognise past principals.

The South Building is the next largest building containing the Library and VCE Centre. The East Building is primarily used for History, Geography and general classes and is the third largest of the four buildings. The West Wing is the smallest of the buildings, but is conjoined with the Music Wing. The west wing features many lockers, mainly for the younger students (Year 7–8).

The Music Wing was developed, planned, constructed and funded by ex-students and ex-teachers, including Stella Langford and J. Economo.

Early in 2004, a new Gene Technology Access Centre (GTAC) was opened for use by staff and students from across the state. This allows students from throughout Victoria to have direct exposure to cutting edge research in the genetics field.

An extension of the canteen was completed in the last quarter of 2006 which connected it with the M.S. Sharman Hall.

A fourth level extension to the South Wing was completed early in 2007 and was named the VCE Centre. The extension was made for VCE students. It has classrooms specifically for VCE students and the Bryce Sub-school Offices are located in the centre.

A series of building works were undertook from 2010 to 2014. In 2011, the West Building was gutted and the interior was completely rebuilt, allowing for more classroom spaces. Minor renovations were made to the bottom floor of the North Building to construct a food technology classroom and kitchen. In conjunction with the University of Melbourne, a new dedicated science school was created for students in year 11 and 12, on space previously occupied by the University's Veterinary Science buildings. The school was named the Elizabeth Blackburn School of Sciences (EBSS), after a former student of the school. A dedicated art classroom for VCE students was also constructed, above the existing Art/Technology building.

In 2001, University High was ranked tenth in Australia's top ten schools for the education of girls based on the number of female alumni in the Who's Who in Australia.

All content from Kiddle encyclopedia articles (including the article images and facts) can be freely used under Attribution-ShareAlike license, unless stated otherwise. Cite this article:
University High School, Melbourne Facts for Kids. Kiddle Encyclopedia.