Coburg is a suburb of Melbourne, Victoria, Australia, 8 km north of Melbourne's central business district. Its local government area is the City of Moreland, although a handful of properties on Coburg's eastern boundary are located in the City of Darebin. At the 2011 Census, Coburg had a population of 24,977.

Coburg is designated one of 26 Principal Activity Centres in the Melbourne 2030 Metropolitan Strategy.

Prior to European occupation, the area around Coburg and Merri Creek was occupied by the Woiwurrung speaking Wurundjeri people of the Kulin Nation. The Wurundjeri had a religious relationship to their land, participating in corroborees and sacred ceremonies on Merri Creek. 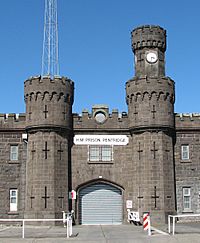 Quarrying of bluestone began in the area 1850s, and by 1875 there were 41 quarries in Coburg. In December 1850 16 prisoners were moved from an overcrowded Melbourne Gaol to a stockade at Pentridge. Prisoners at what came to be called HM Prison Pentridge were immediately put on "hard labour" by breaking up bluestone for road surfaces.

In 1867 a public meeting was called to change the name of the district, as residents were embarrassed at living in a suburb known for its gaol, Pentridge Prison. It was suggested that the suburb name be changed to Coburg, the government agreed with the proposal and the change was made in March 1870.

Major features of the area include the Sydney Road commercial area, the Moreland City Council civic centre precinct on Bell Street including the Coburg City Hall, La Rose house (Victoria's oldest known private dwelling), the John Fawkner Hospital on Moreland Road, and Lake Reserve on Merri Creek. The suburb's most famous landmark is HM Prison Pentridge, which has recently been redeveloped into a housing estate. Land prices have risen considerably since 2001, with The Grove long regarded the most prestigious street in the suburb.

Coburg has a number of places of heritage significance listed on the Victorian Heritage Register:

All content from Kiddle encyclopedia articles (including the article images and facts) can be freely used under Attribution-ShareAlike license, unless stated otherwise. Cite this article:
Coburg, Victoria Facts for Kids. Kiddle Encyclopedia.