Her Majesty's Prison Pentridge was an Australian prison that was first established in 1851 in Coburg, Victoria. The first prisoners arrived in 1851. The prison officially closed on 1 May 1997.

Pentridge was often referred to as the "Bluestone College", "Coburg College" or "College of Knowledge". The grounds were originally landscaped by landscape gardener Hugh Linaker. 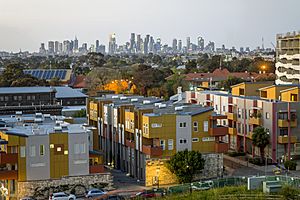 Looking South towards the City of Melbourne from Pentridge Boulevard 2020

The site is currently split into two parts.

All content from Kiddle encyclopedia articles (including the article images and facts) can be freely used under Attribution-ShareAlike license, unless stated otherwise. Cite this article:
HM Prison Pentridge Facts for Kids. Kiddle Encyclopedia.