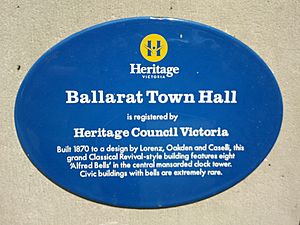 A Heritage Victoria blue plaque on the Ballarat Town Hall

Heritage Victoria is a Victorian State Government agency responsible for administering the Heritage Act 1995 and supporting the work of the Heritage Council of Victoria.

Heritage Victoria was formed from the earlier Historic Buildings Preservation Council, itself It is part of the Department of Transport, Planning and Local Infrastructure. The Heritage Council is an independent statutory authority, which is also established under the Heritage Act. Heritage Victoria's main roles are to identify, protect and interpret Victorian cultural heritage resources, particularly those considered to be of State significance. It provides advice on heritage matters to local and State government, industry and the general community.

Heritage Victoria marks some places on the Register with a Blue plaque.

Heritage Victoria has been criticized in the past either for excessive restrictions on what private owners can do with registered places, or for failing to properly protect Victoria's Heritage, for example in the approval of a multistory tower and partial demolition of the Windsor Hotel. However, it has also won awards for some of its work, such as the mobile phone App for identifying and learning about heritage places. It also maintains a publicly searchable on-line database of places, and database of historical objects and archaeological finds.

All content from Kiddle encyclopedia articles (including the article images and facts) can be freely used under Attribution-ShareAlike license, unless stated otherwise. Cite this article:
Heritage Victoria Facts for Kids. Kiddle Encyclopedia.