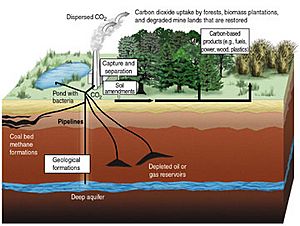 Illustration showing both terrestrial and geological sequestration of carbon dioxide

Carbon sequestration is the process of capturing carbon dioxide (CO2) gas in the atmosphere. It is also the process of capturing CO2 from from new and existing power plants and factories before they are released into the atmosphere. Once the CO2 gas has been contained it is placed into long-term storage. Carbon sequestration aims to eliminate harmful human introduced carbon from our atmosphere by disrupting the carbon cycle. It is also to prevent catastrophic climate changes in this and the next century.

There are two long-term ways to remove CO2 from our atmosphere:

All content from Kiddle encyclopedia articles (including the article images and facts) can be freely used under Attribution-ShareAlike license, unless stated otherwise. Cite this article:
Carbon sequestration Facts for Kids. Kiddle Encyclopedia.