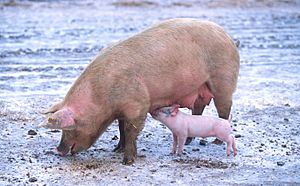 Pigs can have more than one type of flu at the same time. This means that viruses can mix genes and become a type of flu that could cause a pandemic.

Swine flu is common in pigs. Normally, it only infects people who have been in close contact with pigs. However, the disease has also spread from one person to another. Swine flu can cause fever, disorientation (not being clear-headed), stiffness of the joints, vomiting, and loss of consciousness. Sometimes this ends in death. There are different types, or strains, of swine flu. They are called H1N1, H1N2, H3N1, H3N2, and H2N3. 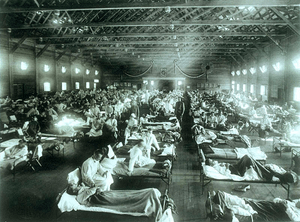 H1N1 came from the Spanish flu, which caused a pandemic in humans in 1918 and 1919. New viruses came from the Spanish flu. These viruses became common in pigs. Every once in a while, the viruses spread from pigs to humans. This has happened during the 20th century. (However, they happened at the same time as the flu epidemics that happen every year. Because of this, it is hard to tell the difference between 'normal' influenza and swine influenza.) Infections that spread from pigs to humans are rare. Scientists only know of 12 known cases in the United States since 2005.

It is very difficult to prevent the flu virus. This is because the virus changes all the time. If a person gets the flu, his body forms antibodies to fight that virus off if it happens again. But since the flu virus changes all the time, a person's antibodies do not recognize the virus the next time it happens, because it is different. The same thing happens with vaccines.

The changes in the flu virus can cause a flu pandemic. For example, the virus might only change a little bit in about two to three years. After about ten years, most people will have developed antibodies to fight these small changes. But if the virus then changes a lot, there can be a pandemic. Hundreds of millions of people suddenly realize that the antibodies they developed are useless. Even during the Spanish flu pandemic, the first wave of the disease was relatively mild, while the second wave was very deadly.

In 1957, an Asian flu pandemic infected about 45 million Americans and killed 70,000. Eleven years later, from 1968 to 1969, the Hong Kong flu pandemic infected 50 million Americans and caused 33,000 deaths. It also cost about $3.9 billion. In 1976, about 500 soldiers became infected with swine flu over a few weeks. However, by the end of the month, investigators found that the virus had "mysteriously disappeared", and there were no more signs of swine flu anywhere on the post. There were a small number of isolated (far-apart) cases around the U.S. However, these were in people who were thought to have caught the virus from pigs.

Scientists fear the swine flu virus might mutate, or change, into a pandemic as deadly as the 1918/1919 pandemic. They watched the outbreak in 2009, and made plans about what to do if a global pandemic breaks out.

Where swine influenza is found

The bird flu virus H3N2 is endemic in pigs in China. It has recently been found in pigs in Vietnam. Specialists also think that this might lead to new variations of the influenza virus. Pigs can carry human influenza viruses. These viruses can combine in new ways, and exchange certain genes with H5N1. Through mutation, this would create a form of the virus that can pass easily among humans. H3N2 evolved from H2N2 by antigenic shift. In August 2004, researchers in China found H5N1 in pigs.

In 2005 it was discovered that H5N1 could be infecting up to half of the pig population in some areas of Indonesia, but without showing symptoms. Chairul Nidom, a virologist at Airlangga University's tropical disease center in Surabaya, East Java, did some independent research: he tested the blood of 10 apparently healthy pigs housed near poultry farms in West Java where avian flu had broken out, Nature reported. Five of the pig samples contained the H5N1 virus. The Indonesian government has since found similar results in the same region. Additional tests of 150 pigs outside the area were negative. 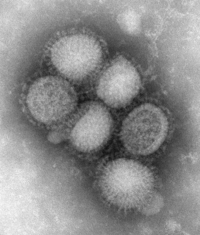 Electron microscope image of the N1H1 virus. The viruses are 80–120 nanometres in diameter.

The Centers for Disease Control and Prevention (CDC), a United States government agency, reports that the symptoms and transmission of the swine flu from human to human is much like seasonal flu. Usually, the symptoms are fever, lethargy (feeling tired), lack of appetite and coughing. Some people with swine flu also have reported runny nose, sore throat, nausea, vomiting and diarrhoea. It is believed to be spread between humans when an infected person coughs or sneezes and then touches something. Another person then might touch the same thing with the virus on it and then touch their own nose or mouth. The swine flu in humans is most contagious during the first five days of the illness although some people, most commonly children, can be contagious for up to ten days. Diagnosis can be made by sending a specimen (sample), collected during the first five days, to the CDC for analysis.

The Swine Flu is susceptible to four licensed drugs in the United States, amantadine, rimantadine, oseltamivir and zanamivir. However, for the 2009 outbreak, it is recommended it be treated with oseltamivir and zanamivir. The vaccine for the human seasonal flu does not protect against the swine flu. Even if the virus strains are the same specific variety, the antigenicity is very different.

Present vaccination strategies for SIV control and prevention in swine farms, typically include the use of one of several bivalent SIV vaccines commercially available in the United States. Of the 97 recent H3N2 isolates examined, only 41 isolates had strong serologic cross-reactions with antiserum to three commercial SIV vaccines. Since the protective ability of influenza vaccines depends primarily on the closeness of the match between the vaccine virus and the epidemic virus, the presence of non-reactive H3N2 SIV variants suggests that current commercial vaccines might not effectively protect pigs from infection with a majority of H3N2 viruses.

The current vaccine against the seasonal influenza strain H1N1 is thought unlikely to provide protection. The director of CDC's National Center for Immunization and Respiratory Diseases said that the United States' cases were found to be made up of genetic elements from four different flu viruses—North American swine influenza, North American avian influenza, human influenza A virus subtype H1N1, and swine influenza virus typically found in Asia and Europe. On two cases, a complete genome sequence had been obtained. She said that the virus is resistant to amantadine and rimantadine, but susceptible to oseltamivir (Tamiflu) and zanamivir (Relenza). 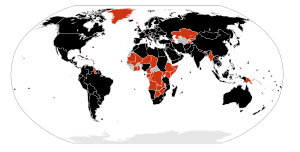 A new strain of swine influenza A called H1N1 was responsible for the swine flu outbreak in 2009 in humans. It resulted from a combination of several strains of influenza in humans and influenza in birds as well as swine influenza. Tests were done, they found that the hemagglutinin (HA) gene was similar to that of swine flu viruses present in United States pigs since 1999, but the neuraminidase (NA) and matrix protein (M) genes resembled versions present in European swine. Viruses that were built like this had not been found in humans or pigs before. There is no program to monitor what viruses are circulating in pigs in the United States, however.

All content from Kiddle encyclopedia articles (including the article images and facts) can be freely used under Attribution-ShareAlike license, unless stated otherwise. Cite this article:
Swine influenza Facts for Kids. Kiddle Encyclopedia.