The South African Cheetah (Acinonyx jubatus jubatus), also known as Namibian Cheetah, is the nominate subspecies of cheetah native to Southern Africa. It is the most abundant subspecies estimated at more than 6,000 individuals in the wild. Since 1990 and onwards, the population was estimated at approximately 2,500 individuals in Namibia, until 2015, the cheetah population has been increased to more than 3,500 in the country. 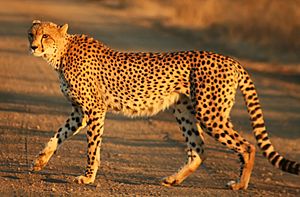 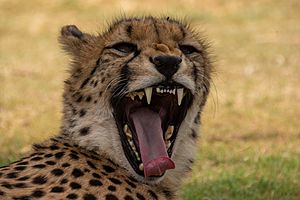 Teeth and tongue of cheetah

The cheetah has a bright yellow or sometimes a golden coat, and its fur is slightly thicker than that of other subspecies. The white underside is very distinct, especially on the neck and breast, and it has less spotting on its belly. The spots on the face are more pronounced, and as a whole its spots seem more dense than those of most other subspecies. The tear marks are notably thicker at the corners of the mouth, and almost all of them have distinct brown mustache markings. Like the Asiatic cheetah, it is known to have fur behind its tail and have both white and black tips at the end of its tail. However, the cheetah may also have only a black tip at the end of its tail.

In desert areas, such as the Kalahari, cheetahs are somewhat smaller and lighter in weight, with thinner, bright-colored fur, a trait the Northwest African cheetah also has.

All content from Kiddle encyclopedia articles (including the article images and facts) can be freely used under Attribution-ShareAlike license, unless stated otherwise. Cite this article:
Southeast African cheetah Facts for Kids. Kiddle Encyclopedia.