Kids Encyclopedia Facts
This page is about the island in South Australia . For other uses, see Pearson.

Pearson Island is an island located in the Australian state of South Australia within the Pearson Isles an island group located in the larger group known as the Investigator Group about 63 kilometres (39 mi)* southwest by west of Cape Finniss on the west coast of Eyre Peninsula. The group was discovered and named by Matthew Flinders on 13 February 1802. The island group has enjoyed protected area status since the 1960s and since 2011, it has been part of the Investigator Group Wilderness Protection Area. Pearson Island is notable both for its colony of Pearson Island rock-wallaby and for being a destination for scientific research. 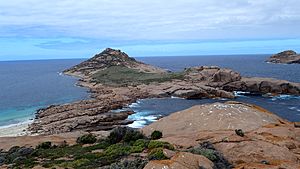 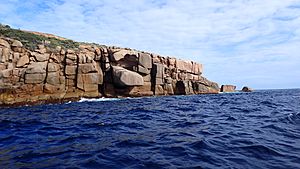 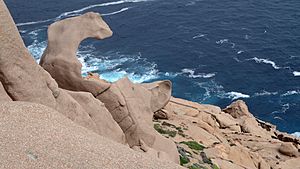 "The Craw" rock formation on the northern side of Pearson Island

It consists of one land mass with two relatively smaller peaks rising out of the sea in an arc extending to the south east via a spit of rock connected to its most southerly point. The arc encloses a bay known as “Anchorage Cove” which is sheltered from the weather both from the west and the south and which can be respectively used as an anchorage and as a landing point. The three parts of the island are informally referred to in one source respectively as the “north section”, the “middle section” and the “south section”. A unnamed rock which is permanently dry is located immediately west of the "south section" of Pearson Island.

The island has an area of 213 hectares (530 acres)*. Its highest point is a feature called “Hill 781” with a height of 238 metres (781 ft)* above sea level and which is located in the south west end of the North section and which is named after its height in the imperial unit of measurement. “Hill 781” and two other hills, “North Hill” and “East Hill” on the “north section” are of a height greater than 200 metres (660 ft)* while the highest point on the remainder of the island is “South Hill” on the “south section” with a height of 115 metres (377 ft)*.

The “north section” has two valleys - one opening onto a bay to the north known as “East Cove” while the other valley opens onto an unnamed cove on the east side of the island. Each is enclosed on one side by the ridge line on the west side of the island that connects “North Hill” and “Hill 781” and by a ridge line that connects “Hill 781” to “East Hill”. Each valley has a drainage system which drains into a creek which are respectively known as “North Creek” and “Main Creek”.

Pearson Island was formed along with the rest of the Pearson Isles about 10,500 years ago following the rise of sea levels at the start of the Holocene.

Geologically, Pearson Island and the other members of the Pearson Isles are the summits of an inselberg partially concealed by sea level rise. Pearson Island exhibits landforms caused firstly by the formation of the inselberg and the characteristics of the granite from which it formed and secondly by the erosive and formative processes associated with the sea.

Firstly, landforms associated with the formation of the inselberg and with its constituent material respectively are sheet structures and orthogonal jointing. Sheet structures which are flat or curvilinear layers of granite which have separated from the body of the inselberg due to stresses within the overall granite body. The presence of orthogonal jointing within the sheet structures at right angles to the plane of the sheet structures create access for moisture into joints resulting in enlargement of the joints and the ultimate fracture of the sheet into “cubic, quadrangular or rhomboidal blocks” which can become either individual or field of free-standing granite boulders of 2–3 metres (6 ft 7 in–9 ft 10 in)* in height.

As of 1996, at least six plant associations are reported as being present on Pearson Island.

Firstly, the parts of the island above the height of 100 metres (330 ft)* above sea level support a woodland of sheoak where both shelter and soil is present. The woodland’s density increases with altitude with the result that individual sheoaks will reach a height of 3 metres (9.8 ft)* and support an understorey of species such as dryland tea tree, ruby saltbush and rock fern.

Secondly, below the altitude of 100 metres (330 ft)*, two Melaleuca species, dryland tea tree and swamp paperbark, are present as thickets with the former species being reported as the “most widespread” of the two species.

Thirdly, a scrub of swamp paperbark is present along the Main Creek watercourse in the eastern valley where favourable conditions such as “highly saline” soil and the shelter provided by the valley are present. Areas of the island close to its coastline have a heath cover.

Fourthly, where the soil is granitic in origin, the heath is dominated by twiggy daisy-bush with sub-ordinate species such as common correa and shore westringia.

Fifthly, grey saltbush dominates in the limestone-derived soils while marsh saltbush is present in both soil types.

Sixthly, a herbfield featuring both karkalla and Austral stork's bill and fringed with round-leaved pigface is found on “the thinnest, most exposed soils on top of granite outcrops fronting the sea”. 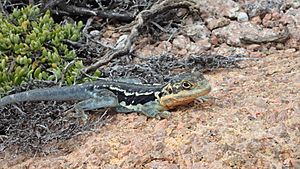 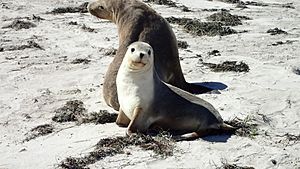 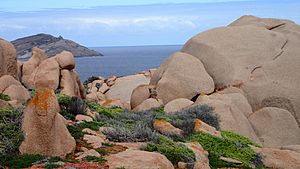 As of 1996, the following mammals have been observed - Pearson Island rock-wallaby, bush rat and a breeding colony of Australian sea lion.

Pearson Island rock-wallaby (Petrogale lateralis pearsoni) is a sub-species of the black-footed rock-wallaby which became isolated on what is now Pearson Island by sea level rise about 10.500 years ago. Specimens were first collected by F Woods Jones in 1920 and described as a new species in 1922. It was subsequently re-described as a sub-species of the black-footed rock-wallaby. The rock-wallabies originally occupied the “north section” of the island until 1960 when six specimens were accidentally released onto the “middle” and “south” sections of the island. By 1976, the six specimens had reproduced into a population estimated at 150 individuals compared with a population on the “north section” estimated between 250 and 300 in 1975. In 1974 and 1975 respectively, groups of rock-wallabies from the "north section" of Pearson Island were transferred to Thistle Island and Wedge Island in Spencer Gulf where the populations are reported in 2008 as being respectively 500 and 200 individuals.

Pearson Island is part of the island group which was first sighted by Matthew Flinders on Saturday, 13 February 1802 and subsequently named by Flinders on the same day as the Pearson Isles.

Naming of the island

The name of island derived from that of the group. While the name is widely used, it is not officially named. It also is referred to as the “North Island” within the context of the Pearson Isles by a number of sources.

Agricultural and other economic use

Pearson Island was briefly used for the grazing of sheep in the 19th century by Anton Schlink, who had leased nearby Flinders Island for the same purpose, however, with unsuccessful results due to the island’s “unfavourable, rocky and dry nature” and difficulties with stock management. The waters immediately adjoining the island have been used for commercial fishing, recreational fishing and recreational diving.

Pearson Island has been the subject of scientific interest since the early twentieth century in respect to its geology, its ecology and its terrestrial and marine flora and fauna. The island and its companions are an attractive destination for scientists because of their relative remoteness, the relative low human impact and the absence of introduced pests.

Pearson Island was first visited by Edgar Waite, the then director of the South Australian Museum in 1914 followed by F Woods Jones, the then chair of anatomy at the University of Adelaide in 1920.

The island was then the subject of three expeditions organised by the Royal Society of South Australia (RSSA) in the years 1923, 1960 and 1969. The 1923 expedition was funded by Sir George Murray, the then chief justice of Supreme Court of South Australia and led by F Woods Jones. The 1960 expedition was led by T. D. Campbell, anthropologist and a former Professor of Dentistry at the University of Adelaide. The 1969 expedition was a joint project conducted in conjunction with the then Department of Fisheries and Fauna Conservation and was led by scientists Scoresby Shepherd and I.M. Thomas.

The most recent expedition discussed in the literature is an expedition organised by the then Department of Environment and Heritage in 2006 to visit islands within the Investigator Group including Pearson Island and included a range of personnel from various government agencies including archaeologists, botanists, geologists and zoologists.

A navigation aid has been located on the middle section of Pearson Island since 1968. It consists of a 2 m (6 ft 7 in) high tower with a group flashing light placed at a height of 79 m (259 ft) above sea level. The land on which the aid is located is owned by the Australian Maritime Safety Authority (AMSA) which is the Australian government agency responsible for navigation aids. Access to the island for the maintenance of the navigation aid is via helicopter.

Since 2012, the waters adjoining Pearson Island have been part of a sanctuary zone in the Investigator Marine Park.

All content from Kiddle encyclopedia articles (including the article images and facts) can be freely used under Attribution-ShareAlike license, unless stated otherwise. Cite this article:
Pearson Island Facts for Kids. Kiddle Encyclopedia.