Masked woodswallow (Artamus personatus) is a species of bird in the Artamidae family.

A.personatus is a common, gregarious and highly nomadic species, appearing in large flocks usually with white-browed woodswallow (Artamus superciliosus). Among the few passerines that have powder down through their plumage. Listed as least concern on the IUCN Red List. 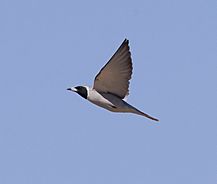 Ranging from 18–20 cm in length with a wingspan of 32–34 cm, weighing approximately 37 grams, the masked woodswallow is similar in size to the white-browed woodswallow. Sexes differ markedly in colour and also in immature plumage. This difference between sexes is unique only to the masked woodswallow and white-browed woodswallow. Adult males have a sharply defined black face mask with a pale edge. This mask covers the lores, ear coverts, chin and throat. Upperparts are dark blue grey with a prominent white tip on the tail. The underbody is pale grey, fading to greyish white on under tail coverts. Legs and feet are grey to grey black or black. Adult females are similar to adult males but slightly browner and mask is indistinct. Juveniles are similar to adult females but slightly browner with fletched and mottled buff.

Exclusively pair breeders, consistent with being migratory. A.personatus shows no ecological segregation with A.supercilious but no co operative breeding has been recorded as with other Artamus species. A.personatus breeds throughout most of its distribution range with the exception of eastern and south eastern coastal areas and north of latitude 20°. Usually breeds during spring and summer with annual variation. Breeding frequency is usually once, occasionally twice a year.

Similar to the nest of white-breasted woodswallow (Artamus leucorynchus) but less substantial. Usually only one to two metres above the ground, often only a shallow, frail bowl. Has been recorded in stumps, fallen limbs, bush or scrub, fence posts and protruding bark. Nest materials include twigs and grass, with an upper layer of dry or green grass. Both sexes build the nest.

All content from Kiddle encyclopedia articles (including the article images and facts) can be freely used under Attribution-ShareAlike license, unless stated otherwise. Cite this article:
Masked woodswallow Facts for Kids. Kiddle Encyclopedia.