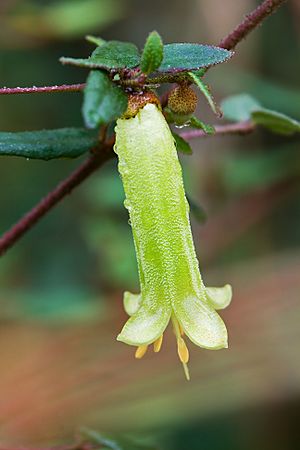 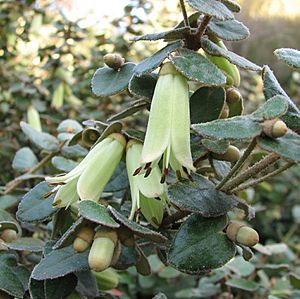 Correa reflexa, commonly known as common correa or native fuchsia, is a shrub which is endemic to Australia.

Plants are quite variable and a large number of varieties and local forms have been identified. Heights vary from prostrate to 1.5 metres high. Leaves are generally oval in shape and range from 10mm to 50mm long. Their surfaces often have visible oil glands and short hairs. The pendant, tubular flowers occur in groups of 1 to 3 and are up to 40 mm long with 4 flaring triangular tips. Colour is variable including pale green, red with yellow tips and other variations.

The following varieties are accepted by the Australian Plant Census:

Correa reflexa prefers a position with good drainage and some shade. The species is generally not suited to tropical regions, although use of forms from sub-tropical areas of New South Wales may afford some success. Tip pruning after flowering promotes a more compact form and enhanced flowering in the following season. Plants are generally pest and disease free. Propagation from seed is difficult, but plants may be readily propagated from semi-mature cuttings of new seasons growth which also ensures plants are true-to-form.

All content from Kiddle encyclopedia articles (including the article images and facts) can be freely used under Attribution-ShareAlike license, unless stated otherwise. Cite this article:
Correa reflexa Facts for Kids. Kiddle Encyclopedia.