The Horsfield's bronze-cuckoo is one of five Australian species in the genus Chrysococcyx (formerly Chalcites) a type of parasitic bird, that parasitises fairy-wrens primarily to raise their young.

The five species of cuckoo in the genus Chrysococcyx: 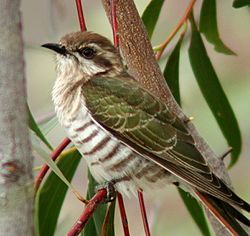 The Horsfield's bronze-cuckoo is known as a brood parasite, this means that they lay their eggs in a host species nest. They mainly parasitise the fairy-wrens in the genus Malurus. It has been well documented that the superb fairy-wren (Malurus cyaneus) and the splendid fairy-wren (Malurus splendens) are the two main species to bear host to the Horsfield's bronze-cuckoo, although they may also parasitise other small Passeriformes including thornbills, warblers and scrub-wrens that can be utilised as a secondary host in certain locations. Although the behavioural attributes of a host species may play a role in parasitism, it is thought that the female selects its host through imprinting, remembering the species that it was raised by and ultimately using that species to raise its brood.

As a brood parasite, the Horsfield's bronze-cuckoo does not build its own nest but will use a host species' nest to lay its eggs. The breeding season for the Horsfield's bronze cuckoo relies on their host and they will lay one to mimic that of the fairy wren or thornbill's egg, an elongated pinkish-white egg, that is speckled with red-brown spots. The breeding season for the superb fairy-wren is between September and February and a female may have three consecutive broods in this time, allowing the cuckoo multiple attempts to parasitise this species. The female cuckoo may choose a breeding site with a high density of hosts, which allows extra opportunity for her success in parasitising a nest successfully. Studies have shown at one site a female did not parasitise a territory with less than 23 breeding pairs of their primary host (Malurus cyaneus).

The egg of a Horsfield's bronze-cuckoo is small for its size, evolving over time to mimic those of their host in what can be described as an evolutionary arms race between parasite and host. Also, the smaller the host for the cuckoo, the likelihood of successfully raising multiple broods thus the energy and nutrients needed to produce more smaller eggs than few larger eggs can be utilised more efficiently. Egg laying is very fast for the Horsfield's bronze cuckoo; it is able to lay an egg in under 6 seconds typically in the morning shortly after the host has laid. The adult cuckoo removes one egg each time she lays, only laying one egg per nest and replacing one host egg with one of her own.

Younger, semi-experienced females were generally selected over new and novice breeding females due to their success and experience. The Horsfield's bronze-cuckoo chose females that would choose similar breeding sites to previous years and were likely to raise several broods in one season. Generally, the superb fairy wren will not reject the cuckoo's egg. Fairy-wrens make oval dome nests that can be dark inside, meaning it is harder for the fairy-wren to distinguish between its own egg and the host's egg. Furthermore, the mimicry in eggs from the Horsfield's bronze-cuckoo has evolved over time and the parasite eggs are hard to distinguish except for their slight elongation and glossier finish.

The cuckoo chick hatches within 12 days of incubation, 2 days before the host egg, ejecting other eggs in the nests within two days of hatching, leaving the cuckoo the sole chick. As newly hatched cuckoo chicks eject host eggs they do not get to learn the host's begging call, but can possess begging call polymorphism, where nestlings produce the calls of their primary host. As the nestling grows it will be fed by the host parent and possibly the group, growing more rapidly until fledged.

Counter-adaptations have been documented for host species and cuckoos alike, as each adapts to the other in a coevolutionary "arms race". Studies show that coevolutions happen at all stages of the growth cycle, not just the early stages.

Fairy-wrens have adapted some host defences to reduce parasitism. The high cost of hosting a parasitic species, in energy and genetics, drives the host to improve its defences, which in turn drive the parasite to improve its offences.

Among the host's defensive adaptations:

Among the cuckoo's adaptations:

All content from Kiddle encyclopedia articles (including the article images and facts) can be freely used under Attribution-ShareAlike license, unless stated otherwise. Cite this article:
Horsfield's bronze cuckoo Facts for Kids. Kiddle Encyclopedia.