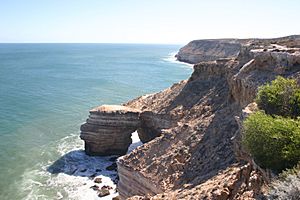 Kalbarri National Park preserves the inland desert regions of red and white striped Tumblagooda sandstone east of the town of Kalbarri, particularly the lower reaches of the Murchison River and its gorge, as well as the mouth of the river by Meanarra Hill.

The western edge of the park protects the coastline south of the town which features cliffs more than 100 m (328 ft) high. The coastal area contains several wind and water eroded rock formations including a sea stack and a natural bridge.

The park is open all year round though temperatures can be extremely high from December through April. The park lies in the northernmost limits of the transition zone between a Mediterranean and a semi-arid climate. Winters are warm with moderate precipitation. Summers are hot and dry with temperatures that frequently exceed 40 °C (104 °F) in the inland part of the park. Inland areas can often be more than 10 °C (18 °F) higher than along the coast and in town. Monthly precipitation levels are low with most rain falling from May through August. Heavy rainfalls may cause the roads to the gorge to be closed. 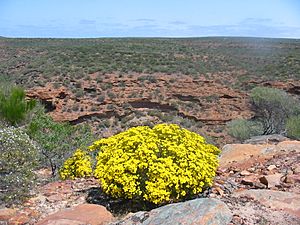 The Kalbarri area is known for its diversity and extent of wildflowers. More than 800 species of wildflowers bloom from late winter through early summer with peak times in August and September. Twenty-one plant species are found only in the coastal cliff tops and gorge country predominantly in the National Park. One of the best known local plants is the Kalbarri catspaw, a small yellow or red plant that is usually seen on recently burnt country from August to September. Several orchids can only be seen in and near the park, including the Kalbarri spider orchid and the Murchison hammer orchid. 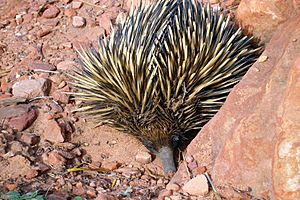 A short-beaked echidna found on the trail to Nature's Window

The park area has observation records for about 200 different animal species in the interior of the park along the Murchison River. More than 400 species have been recorded near the coast and around the town of Kalbarri. The threatened tammar wallaby was observed previously in the area but not lately.

The most popular activities are sightseeing, boating, fishing, picnicking and bushwalking. Other activities include abseiling in the gorge and horseback riding, as well as scuba diving, snorkelling, surfing and swimming in the Indian Ocean at Red Bluff Beach and the small beach at Pot Alley. From Kalbarri there are scenic cruises along the Murchison River and flights over Kalbarri National Park. Two viewing platforms with views over the Murchison River Gorge are under construction and .

There are no campsites or other accommodations and no water available within the park boundaries. All overnight visitors must use the facilities in the town unless they are on a multi-day bushwalk or boat tour.

Coastal part, starting from the town of Kalbarri and moving south: 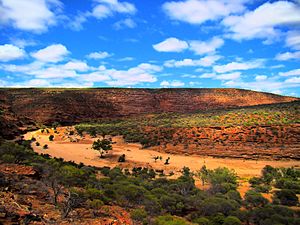 The Loop, a long meander 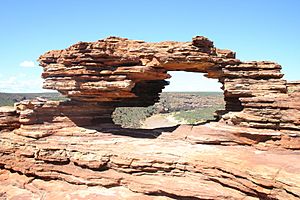 All content from Kiddle encyclopedia articles (including the article images and facts) can be freely used under Attribution-ShareAlike license, unless stated otherwise. Cite this article:
Kalbarri National Park Facts for Kids. Kiddle Encyclopedia.