Copenhagen Zoo (Danish: København Zoo) is a zoological garden in Copenhagen, Denmark. Founded in 1859, it is one of the oldest zoos in Europe and is a member of EAZA. It comprises 11 hectares (27 acres) and is located in the municipality of Frederiksberg, sandwiched between the parks of Frederiksberg Gardens and Søndermarken. With 1,161,388 visitors in 2008 it is the most visited zoo and 4th most visited attraction in Denmark. The zoo is noted for its new Elephant House designed by the world-famous British architect Sir Norman Foster. The zoo maintains and promotes a number of European breeding programmes.

Copenhagen Zoo was founded by the ornithologist Niels Kjærbølling in 1859. He was given the summer garden of "Prinsess Vilhelmines Have" (The garden of Princess Vilhelmine) by the chief directorate of Copenhagen. The animals that the visitors could contemplate at the opening were eagles, chickens, ducks, owls, rabbits, a fox, a seal and a turtle. 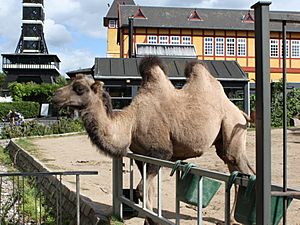 One of the camels in the Copenhagen Zoo

In the early years the zoo focused on showing as many different types of animals as possible, but as animal welfare later became an issue, the number of different species has dropped in favor of more space to each animal. One of the most notable animals kept there was a male slow worm that lived there from 1892 to 1946 (for 54 years, which is a record among lizards).

Starting in the early 1980s, Copenhagen Zoo has been undergoing a renovations aimed at replacing cages with enclosures which recreate animals' natural environments, giving a better lifestyle to the animals, and a more realistic experience to visitors. The Elephant House and 1.5-hectare (3.7-acre) Savanna are results of these efforts. The Savanna includes a Hippopotamus House where the hippos can be watched underwater.

The zoo has preserved many of its historical buildings. The oldest building still in use, a stable for yaks, was erected in 1872, and now houses the bactrian camels. A Herbivore House built in 1875 still houses herbivores, namely tapirs. An owl tower from 1885 is today left as a memorial commemorating how zoo animals were once kept. 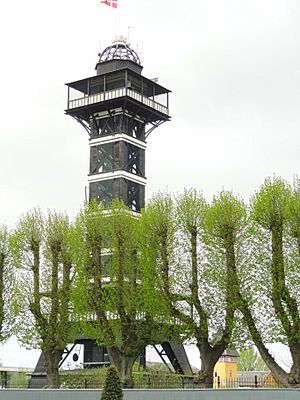 A notable and highly visible feature of the zoo is the wooden observation tower. 43.5 metres (142.7 ft) high, it offers views of the surrounding parklands and city. The tower was built in 1905 and is one of the tallest observation towers built of wood in the world. Its base is similar to that of Eiffel Tower.

The Nordics and the Arctic Ring

In the part of the zoo called "The Nordics" (Danish: Norden), visitors can see species such as harbour seals, snowy owls, reindeer, musk oxen, brown bears, arctic foxes and grey wolves. The "Arctic Ring" (Danish: Den Arktiske Ring), which opened in 2013, has an exhibit for polar bears (including a tunnel allowing underwater views) and an aviary for North Atlantic seabirds (alcids). 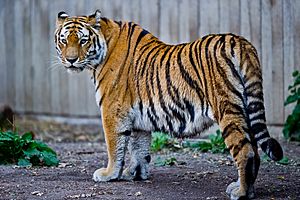 The new Elephant House, which opened in June 2008, is designed by Norman Foster in cooperation with the Danish landscape architect Stig L. Andersson. It houses Asian elephants and contains two glass-domed enclosures. One is for cows and calves and measures 45 by 23 metres (148 by 75 ft). 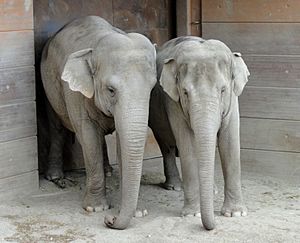 The other is 30 by 15 metres (98 by 49 ft) and is for bulls, kept in separate pens during the mating season for fear of fights. The building also contain an exhibit space and a small lecture hall. The enclosures open out through mighty steel doors into am almost 1 hectare big landscaped paddock with a pool 3 metres (9.8 ft) deep and 60 metres (200 ft) long.

The paddock's border with Frederiksberg Gardens, once a 3-metre (9.8 ft) high wall, has been opened up so that people in the park can now watch the elephants. This has been done because the zoo, with its central location is very much a city zoo, wants to integrate with the urban landscape. At the same time it affords the elephants distant views of open parkland and ancient trees, which prevents them feeling too enclosured. 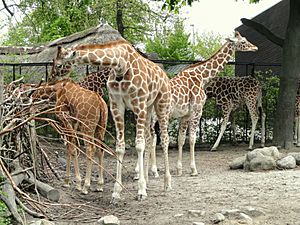 Most of the "Africa" section is taken up by the "Savanna" area. This is an open field with a visitor bridge above containing species such as white rhinoceroses, giraffes, impalas, sable antelopes, ostriches and plains zebras. The hippopotamuses, which have their own separate enclosure, also has partial access to the Savanna. Other species in the Africa section are okapis, Abyssinian ground hornbills, Congo peafowl, caracals and meerkats. 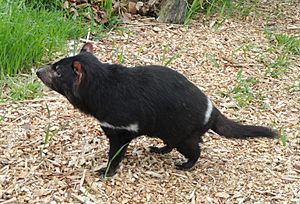 The "Tasmania" section is unique to Copenhagen Zoo. The section was started after the wedding of Frederik, the Crown Prince of Denmark and the Tasmanian native Mary Donaldson in 2004, where the Tasmanian government gifted four Tasmanian Devils to the zoo. These were the first Tasmanian devils to live outside of Australia. The area has since been expanded with a combined area for red-necked wallabies, Eastern Grey Kangaroos and common wombats. Parts of this area is also accessible by visitors, allowing kangaroos and people to cross paths.

In the "South America" section, visitors can see species such as capybaras, guanacos, greater rheas, Patagonian maras, southern screamers and giant anteaters. They all have access to one common area, modeled after the South American pampas.

The "Tropical Zoo" consists of a rain-forest hall with one section for free-ranging birds, turtles and two-toed sloths and another for tropical butterflies and [nile crocodile]]s. In between the two is a section for reptiles, amphibians, fish and the rare java mouse-deer.

In the Children's Zoo, visitors can see farm animals and small domestic animals, such as llamas, goats, cows, pigs, horses, chickens and rabbits.

All content from Kiddle encyclopedia articles (including the article images and facts) can be freely used under Attribution-ShareAlike license, unless stated otherwise. Cite this article:
Copenhagen Zoo Facts for Kids. Kiddle Encyclopedia.