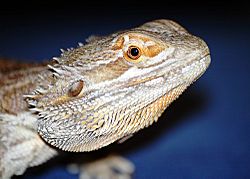 Detail of the "beard"

Bearded dragons are the genus Pogona, which are agamid lizards.

The central bearded dragon is the common name for Pogona vitticeps, which lives in dry areas of Australia. The name "bearded dragon" refers to the fringes around and under the head. The underside of the throat turns black if they are stressed or see a potential rival. 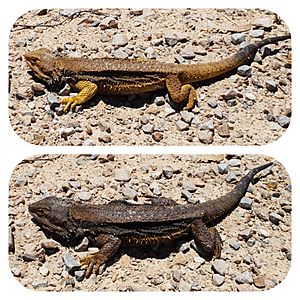 They have the ability to change color during rivalry challenges between males, in situations when they feel threatened and in response to temperature changes such as turning black to absorb heat, and in other stimuli.

In the wild, the central bearded dragon lives in dry, hot forests and deserts in central Australia. They can climb very well, and spend a lot of time on top of tree branches, fenceposts, and bushes. They are cold blooded, and need the sun to keep their bodies warm, so they spend the mornings and evenings out in the sun. During the hottest part of the day and during the night they hide underground.

Bearded dragons do not make sounds usually, but when they are scared they might hiss like a cat. They move their bodies and change color to talk to each other. Sometimes, young bearded dragons will wave their arms to greet adults. A dominant bearded dragon will take the highest spot to rest, and will climb over others to get there. Bearded dragons also bob their heads up and down to communicate.

When a female bearded dragon is ready to lay eggs she will not eat very much and will spend most of her time trying to dig.

Central bearded dragons eat small and large insects, such as grasshoppers and worms. They also eat leaves, fruit, vegetables and flowers. They get most of their water from the food they eat, but they also need to drink sometimes.

Bearded dragons—most commonly, the inland or central bearded dragon (sometimes Rankin's bearded dragon)—are kept as pets. Introduced as pets to the US during the 1990s, they are a popular exotic species pet even though Australia, from the 1960s onward, has banned the sale of its wildlife to the pet trade. They are a popular species among children because of their friendly and calm nature, and the relative ease of caring for them. Generally speaking, the bearded dragon is a solitary animal. Male bearded dragons are usually housed alone, as they will fight with other males and breed with females. Captive adults reach about 40 to 61 cm (16 to 24 in) from head to tail, weigh 350 to 600 g (10 to 20 oz) and live for about 8 to 12 years with good care. They can live up to a maximum of 14 years in captivity. 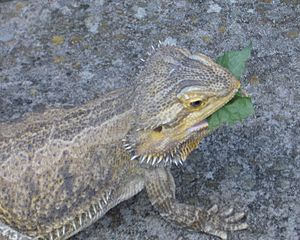 Juvenile and baby bearded dragon diets consist mainly of insects. A juvenile bearded dragon eats insects three times a day on average. The amount of insects they eat differs from dragon to dragon. Crickets and dubia roaches are the most popular insects fed to bearded dragons, but they can also be fed other insects such as black soldier fly larvae, locusts, superworms, waxworms, silkworms, butterworms, fruit flies[disambiguation needed], grasshoppers and hornworms. Bearded dragons also eat increasing amounts of plant based food as they grow; adults should have a diet consisting of more than 60% plant matter, the most important of which is leafy greens.

All content from Kiddle encyclopedia articles (including the article images and facts) can be freely used under Attribution-ShareAlike license, unless stated otherwise. Cite this article:
Bearded dragon Facts for Kids. Kiddle Encyclopedia.