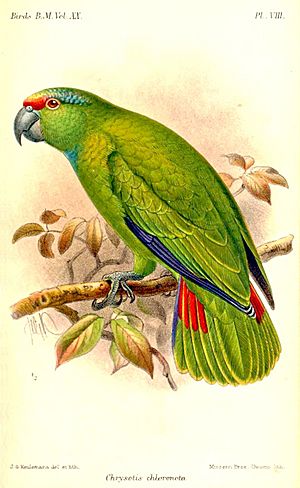 Amazon parrot is the common name for a parrot of the genus Amazona. They are medium-sized, short-tailed parrots native to the New World ranging from South America to Mexico and the Caribbean.

Most amazon parrots are predominantly green, with accenting colors that depend on the species and can be quite vivid. They feed primarily on seeds, nuts, and fruits, supplemented by leafy matter.

Many amazon parrots have a remarkable ability to mimic human speech and other sounds. Partly because of this, they are popular as pets or companion parrots, and a small industry has developed in breeding parrots in captivity for this market. This popularity has led to many parrots being taken from the wild to the extent that some species have become threatened. The Convention on International Trade in Endangered Species of Wild Fauna and Flora treaty has made the capture of wild parrots for the pet trade illegal in an attempt to help protect wild populations.

The genus Amazona (to which amazons belong) was introduced by the French naturalist René Lesson in 1830. The type species was subsequently designated as the southern mealy amazon (Amazona farinosa) by the Italian zoologist Tommaso Salvadori in 1891. The genus name is a Latinized version of the name Amazone given to them in the 18th century by the Comte de Buffon, who believed they were native to Amazonian jungles.

The taxonomy of the yellow-crowned amazon (Amazona ochrocephala complex) is disputed, with some authorities only listing a single species (A. ochrocephala), while others split it into as many as three species (A. ochrocephala, A. auropalliata and A. oratrix). The split is primarily based on differences related to extension of yellow to the plumage and the colour of bill and legs. Phylogenetic analysis of mtDNA do not support the traditional split.

In 2017 a study published by ornithologists Tony Silva, Antonio Guzmán, Adam D. Urantówka and Paweł Mackiewicz proposed a new species for the Yucatan Peninsula area (Mexico), being this named blue-winged amazon (Amazona gomezgarzai). However, a subsequent study questions its validity, indicating that these organisms possibly had an artificial hybrid origin.

Reclassification of the yellow-faced parrot

The yellow-faced parrot (Alipiopsitta xanthops) was traditionally placed within this genus of amazon parrots, but recent research has shown that it is closer to the short-tailed parrot and the species from the genus Pionus, resulting in it being transferred to the monotypic genus Alipiopsitta. 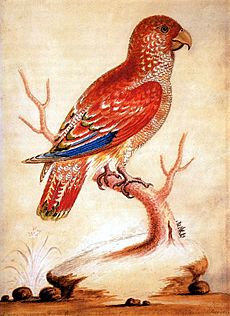 Populations of amazon parrots that lived on the Caribbean islands of Martinique and Guadeloupe are now extinct. It is not known if they were separate species, subspecies, or if they originated from parrots introduced to the islands by humans, so they are regarded as hypothetical extinct species. No evidence of them remains, and their taxonomy may never be established. Populations of several parrot species were described mainly in the unscientific writings of early travelers, and subsequently scientifically described by several naturalists (to have their names linked to the species that they were proposing) mainly in the 20th century, with no more evidence than the earlier observations and without specimens. An illustration of a specimen termed "George Edwards' parrot" has sometimes been considered a possibly distinct, extinct species, but it may also have been a yellow-billed or Cuban amazon with aberrant colouration.

The yellow-headed amazon, yellow-naped amazon, orange-winged amazon, and turquoise-fronted amazon are some of the amazon parrot species which are commonly kept as pets. Amazon parrots, together with macaws and the grey parrot, are all known for their exceptional vocal abilities, playfulness, and dexterity with their feet. Well-trained parrots can be loyal companions, and they can live for 50 years or sometimes more in captivity. However, some amazons – even well-trained ones – can become aggressive, possibly during mating season. To maintain health and happiness, pet parrots require much more training than domesticated animals such as dogs or even cats. They require understanding, manipulative toys, and rewards for good pet-like behavior, or they can develop quite aggressive behaviors. They have a strong, innate need to chew; thus, they require safe, destructible toys.

Amazon parrots have large appetites and may be prone to obesity in captivity if not permitted to exercise.

All content from Kiddle encyclopedia articles (including the article images and facts) can be freely used under Attribution-ShareAlike license, unless stated otherwise. Cite this article:
Amazon parrot Facts for Kids. Kiddle Encyclopedia.