It is a large, multi-colored parrot with a yellowish white, blue and green head, greenish-bronze upperparts plumage, and violet blue-green wings. 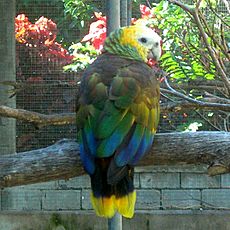 The bird is 40 cm (16 in) long. The plumage of this attractive species is highly variable: virtually no two birds look alike, with a yellowish white, blue and green head, greenish-bronze upperparts, violet blue-green wings, grey feet, and reddish eye. Its tail feathers are blue with broad yellow tips. Both sexes are similar.

There are two different colour morphs: a more common ‘yellow-brown’ morph, and a less common ‘green’ morph. Although both morphs are broadly similar in appearance, the upperparts of the 'green' morph are mainly dull-green and the head is bluish white.

The Saint Vincent amazon is endemic to the heavily forested mountains of the Caribbean island of Saint Vincent in the Lesser Antilles.

It lives in rainforests in the island's central mountains, from 125 to 1,000 m (410 to 3,281 ft); it prefers mountains and valleys at low elevation because there are larger, mature trees needed for the nests.

The Saint Vincent amazons live in groups and feed on the upper parts of large trees. Its diet consists mainly of fruits, seeds, flowers and leaves of several species of the rainforest.

They breed between January and June (mostly February-May) and their nests are in holes in mature, large trees. The female usually lays two to three eggs.

The combined effects of habitat loss, hunting for food, the capture to trade them as pets, and natural disasters (volcanoes and hurricanes, made that the number of Saint Vincent Amazon declined through the 20th century.

Due to all these contributing factors, the St. Vincent parrot is considered Vulnerable on the IUCN Red List of Threatened Species. It is listed on Appendix I and II of CITES.

A group of conservation measures has been able to avoid the extinction of the St Vincent Amazon, including: the enforcement of international and domestic legislation protecting this species from hunting and trade; the protection of habitat through the establishment of the St Vincent Parrot Reserve; and the delivery of successful public education campaigns.

On October 27, 1979, A. guildingii was declared the national bird of St. Vincent and the Grenadines as part of the country's first independence celebration.

All content from Kiddle encyclopedia articles (including the article images and facts) can be freely used under Attribution-ShareAlike license, unless stated otherwise. Cite this article:
Saint Vincent amazon Facts for Kids. Kiddle Encyclopedia.