The common marmoset (Callithrix jacchus) is a New World monkey. It originally lived on the Northeastern coast of Brazil, in the states of Piaui, Paraiba, Ceará, Rio Grande do Norte, Pernambuco, Alagoas and Bahia. Through release (both intentional and unintentional) of captive individuals, it has expanded its range since the 1920s to Southeast Brazil (its first sighting in the wild for Rio de Janeiro was in 1929) and became there an invasive species, raising concerns about genetic pollution of similar species, such as the buffy-tufted marmoset (Callithrix aurita), and predation upon bird nestlings and eggs.

The whole-genome sequence of a female common marmoset was published on 20 July 2014. It became the first New World Monkey to have its genome sequenced. 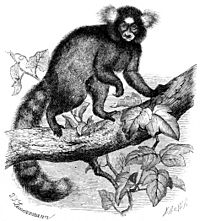 Drawing of a marmoset

Common marmosets are very small monkeys with relatively long tails. Males and females are of similar size with males being slightly larger. Males have an average height of 188 mm (7.40 in) and females have an average height of 185 mm (7.28 in). Males weigh 256 g (9.03 oz) on average and females weigh 236 g (8.32 oz) on average. The pelage of the marmoset is multicolored, being sprinkled with brown, grey, and yellow. It also has white ear tufts and the tail is banded. Their faces have pale skin and have a white blaze on the forehead. The coats of infants are brown and yellow coats with the ear tuft developing later.

As with other members of the genus Callithrix, the common marmosets have claw-like nails known as tegulaes on most of their fingers. Only their halluxes (big toes) have the flat nails or ungulaes that most other primates have. Marmosets have an arboreal locomotion similar to squirrels. They can hang on to trees vertically and leap between them, as well as run across branches quadrupedally. Tegulaes are an adaptation of this type of locomotion. Other Callithrix traits shared include enlarged, chisel-shaped incisors and specialized cecums for their diet.

Common marmosets are native only to east-central Brazil. They have been introduced into other areas and live within the cities of Rio de Janeiro and Buenos Aires, Argentina. Marmosets can be found in a number of forest habitats. They live in Atlantic coastal forests as well as semi-deciduous forests farther inland. They can also inhabit savanna forests and riverine forests. Marmosets are successful in dry secondary forests and edge habitats. 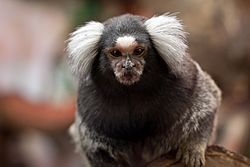 The common marmoset’s claw-like nails, incisor shape, and gut specialization reflect their unique diet which is primarily made of plant exudates and insects. Common marmosets feed on gum, sap, latex, and resin. They use their nails to cling to the side of a tree and, with their long lower incisors, chew a hole in the tree. The marmoset will then lick up the exudates or swoop them with the teeth. 20-70% of the marmoset’s feeding behavior is made of eating exudates.

Exudates provide marmosets with a reliable food source in the marmoset’s seasonal habitat. They rely on these foods particularly between January and April, when fruit is not abundant. A marmoset may visit a tree hole multiple times; including those made by other animals. In addition to exudates, insects also prove an important food source for marmosets, making 24-30% of their feeding time. The small size of the marmoset allows them to subsist on insects, as well as stalking and ambush them. Marmosets will also eat fruits, seeds, flowers, fungi, nectar, snails, lizards, tree frogs, bird eggs, nestlings, and infant mammals. It is possible that marmosets compete for fruit with birds, such as parrots and toucans, and with woolly opossums.

Common marmosets live in stable extended families with only a few members allowed to breed. A marmoset group can contain as many as 15 members, but a more typical number is nine. A marmoset family usually contains 1-2 breeding females, a breeding male, their offspring and their adult relatives, be it their parents or siblings.

The females in a group tend to be closely related and males less so. Males do not mate with breeding females that they are related to. Marmosets may leave their natal groups when they become adults, in contrast to other primate species who leave at adolescence. Not much is known of the reasons marmosets leave their natal groups.

Family groups will fission into new groups when a breeding male dies. Within the family groups, the breeding individuals tend to be more dominant. The breeding male and female tend to share dominance. However, between two breeding females, one is more dominant. In addition, the subordinate female is usually the daughter of the dominant one. For the other members, social rank is based on age. Dominance is maintained though various behaviors, postures and vocalizations and subordinates will groom their superiors. 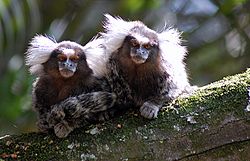 The breeding individuals in a group need the other members to help raise their young. Thus the pair will behaviorally and physiologically suppress the reproduction of the other members of the group. Since these suppressed individuals are likely related to the breeding pair, they have an incentive to care for the young as they share genes with them. In addition, the presence of a related male affects female ovulation. Laboratory studies have shown that female ovulation does not occur when their fathers are around, but does occur when an unrelated male is there instead.

When conditions are right for them to breed, adult females breed regularly for the rest of their lives. The gestation period lasts for five months, and females are ready to breed again around ten days after giving birth. There are five months in between each parturition and they give birth twice a year.

Marmosets commonly give birth to two non-identical twins. Because of this, females are under stress during pregnancy and lactation, and need help from the other members of the family. Infant marmosets instinctively cling to their mothers back and do not voluntarily let go for the first two weeks. After that, they become very active and explore their environment.

The breeding male (likely the father) will begin handling the twins, and all members of the family will care for them. In the following weeks, the young spend less time on their mother’s back and more time moving around and playing. Infants are weaned at three months. At five months they enter their juvenile stage. At this time, they have more interactions with family members other than their parents, and there is rough play for to establish their future status. Another set of infants may be born and the previous young will carry and play with them. Marmosets become sub-adults between nine and 14 months, act like adult and go through puberty. At 15 months, they reach adult size and are sexually mature but can not breed until they are dominant. 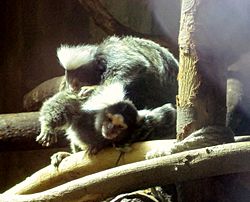 Common marmosets employ a number of vocal and visual communications. To signal alarm, aggression, and submission, marmosets use the "partial open mouth stare," "frown," and "slit-stare", respectively. To display fear or submission, marmosets flatten their ear-tufts close to their heads. Marmosets have two alarm calls: a series of repeating calls that get higher with each call, known as "staccatos"; and short trickling calls given either intermittently or repeatedly. These are called "tsiks". Marmoset alarm calls tend to be short and high-pitched. Marmosets monitor and locate group members with vibrato-like low-pitched generic calls called "trills". Marmosets also employ "phees" which are whistle-like generic calls. These serve to attract mates, keep groups together, defend territories, and locate missing group members. Marmosets will use scent gland on their chests and anogenital regions to mark objects. These are meant to communicate social and reproductive status.

The common marmoset remains an abundant species and are not currently threatened. Nevertheless its habitat had been degraded at a large rate, with around 67% of the cerrado region cleared for human use in the 1990s and around 80% cleared for cultivation more recently. In addition, marmosets are captured and traded as pets. Though popular as pets, they become difficult to control as they get older and are thus abandoned or killed. Common marmosets have also been used for medical experiments. They are used as such in Europe more so than in the United States, and are the most common non-human primates to be experimented on. They are used as model organisms in areas of research such as teratology, periodontal disease, reproduction, immunology, endocrinology, obesity, and aging.

The genome of a female marmoset was published in 2014. It became the first non-human primate, among the New World Monkeys, to have its complete genome sequenced. The genome size is 2.26 Gb, and contains 21,168 genes. Segmental duplications added a total of 138 Mb of non-redundant sequences (4.7% of the whole genome), slightly less than observed in human or chimpanzee (~5%), but more than in orangutan (3.8%).

All content from Kiddle encyclopedia articles (including the article images and facts) can be freely used under Attribution-ShareAlike license, unless stated otherwise. Cite this article:
Common marmoset Facts for Kids. Kiddle Encyclopedia.