Paraíba is one of the states of Brazil. It is in the northeastern part of the country, on the Atlantic coast. It is the easternmost point of the Americas. João Pessoa is the capital city.

In the mid-1500s, Portuguese settlers from Pernambuco founded Filipéia de Nossa Senhora das Neves (today João Pessoa) at the mouth of the Paraíba do Norte River.

The area was found to be perfect for making sugar. The French, the Dutch and the Portuguese all fought to have the Paraíba region to grow sugarcane in. The fortress of Santa Catarina, near João Pessoa, was built to protect the city from the Dutch.

In late 1989 a team looking for gemstone and led by Heitor Dimas Barbosa found what some people believe are the best Tourmaline crystals ever found. Copper in the crystals gives the tourmalines a bright turquoise color that had never been seen before in the gems. The mountains have been searched after this, but no more crystals have been found.

The word nego is Portuguese for "I deny". It refers to protests in the 1920s in Paraíba against Júlio Prestes becoming the President of Brazil. State president João Pessoa supported these protests. João Pessoa joined the alliance to the overthrow of the federal government. This group caused Getúlio Vargas to become president. The rebellion lead to João Pessoa eing killed.

In late 1989 a team led by gemstone prospector Heitor Dimas Barbosa uncovered in a small mountain range what some consider to be the finest tourmaline crystals ever found. A trace of copper gives the tourmalines a vivid turquoise color that had never been seen before in the gems, and is sometimes referred to as "neon".

The "neon" paraiba tourmaline, a vivid blue and blue green, has also been found in other deposits close to the Batalha mine of Barbosa, and also in the neighboring state of Rio Grande do Norte. The bright colors of this tourmaline are due to the presence of copper. Around 2000, a similar copper-containing tourmaline was found in Nigeria, although the colors are not as intense. Around 2005, beautiful crystals of copper-containing tourmaline were found in Mozambique.

Initially, the nomenclature for this tourmaline was "Paraíba tourmaline". Note the capitalization and the accent on the "i". In 2006, the LMHC (Laboratory Manual Harmonization Committee) agreed that "paraiba" should refer to a variety of tourmaline, and not indicate a geographic origin. Note "paraiba" is not capitalized, and does not have an accent on the "i". For more information on paraiba tourmaline, see article on tourmaline. The term "paraiba tourmaline" may now refer to gems found in Brazil, Nigeria, and Mozambique that contain copper and have the characteristic blue-green color. 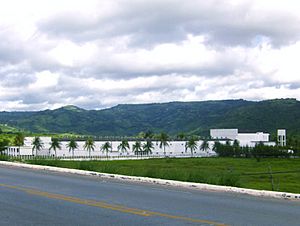 The Paraíba economy is largely based upon the making of shoes and other leather products, the raising of cattle for beef, and sugarcane, corn. Though historically sugarcane has dominated the Paraíba agricultural sector, pineapple, corn, and beans cultivation are also widespread. The other important economical sector in the state is tourism, especially the state urban and unspoilt beaches, ecoturism and festivals such as "carnaval" and "São João." 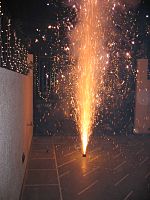 Festa Junina was introduced to Northeastern Brazil by the Portuguese for whom St John's day (also celebrated as Midsummer Day in several European countries), on the 24th of June, is one of the oldest and most popular celebrations of the year. Differently, of course, from what happens on the European Midsummer Day, the festivities in Brazil do not take place during the summer solstice but during the winter solstice. The festivities traditionally begin after the 12th of June, on the eve of St Anthony's day, and last until the 29th, which is Saint Peter's day. During these fifteen days, there are bonfires, fireworks, and folk dancing in the streets (step names are in French, which shows the mutual influences between court life and peasant culture in the 17th, 18th, and 19th-century Europe). Once exclusively a rural festival, today in Brazil, it is largely a city festival during which people joyfully and theatrically mimic peasant stereotypes and clichés in a spirit of jokes and good times. Typical refreshments and dishes are served. Like during Carnival, these festivities involve costume-wearing (in this case, peasant costumes), dancing, heavy drinking, and visual spectacles (fireworks display and folk dancing), such as what happens on Midsummer and St John's Day in Europe, and bonfires are a central part of these festivities in Brazil.

The four-day period before Lent leading up to Ash Wednesday is carnival time in Brazil. Rich and poor alike forget their cares as they party in the streets.

All content from Kiddle encyclopedia articles (including the article images and facts) can be freely used under Attribution-ShareAlike license, unless stated otherwise. Cite this article:
Paraíba Facts for Kids. Kiddle Encyclopedia.