Kids Encyclopedia Facts
This page is about an inner southern suburb of Perth. For the local government area, see City of South Perth.

South Perth is a residential suburb of Perth, Western Australia that adjoins the southern shore of Perth Water on the Swan River; it is 3 kilometres (2 mi) south of the central business district. The suburb adjoins two major arterial roads—Canning Highway and the Kwinana Freeway, and is within the City of South Perth local government area.

The history of the area now known as South Perth before permanent European settlement was broadly similar to that in other parts of what became the Swan River Colony. The area was probably inhabited by peoples of the Noongar tribes, and they had little contact with other peoples. Early Dutch and French explorers reported their presence, but no recorded contact was made. No contact is known to have been made with travellers from any other country. The Dutch expedition commanded by Willem de Vlaming in 1697 was the first to discover the major river and note the presence of black swans on the river. They named it the Swan River. 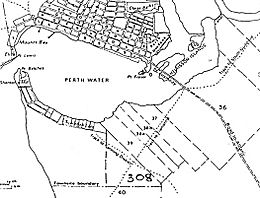 After the permanent settlement of the British and the establishment of the Swan River Colony, most development tended to take place north rather than south of the Swan River in the town of Perth and also in Fremantle, the port suburb. The area was already unofficially known as "South Perth" but was relatively untouched. By 1831, the land along the river frontage had been allocated amongst seven people, and the land was being partially used for agriculture and dairy farms. A mill was built in 1833 and a ferry across the Swan river via the Narrows was established.

There was some conflict between the European settlers and Indigenous Australians, in which one of the leaders was a chief known as Yagan. After his death, local leadership went to a chief variously known as Galute or Kalyute. He led further resistance, but this was countered by a punitive expedition, which resulted in the deaths of fifteen Aboriginal people and the end of organised resistance.

By the 1850s, there was some further development of the area, with more ferry connections and the construction of the Causeway and the Canning Bridge. The area was further surveyed and lots allocated to pensioners. By 1858, the area was officially marked on maps as "South Perth" and some roads had been constructed.

The 1860s saw the realisation that large-scale farming in the district had no future, although dairying, timber cutting and vegetable growing continued. By the 1880s, a number of Chinese gardeners had arrived and they set up market gardens on land on the foreshore, between Suburban Road (now Mill Point Road) and the Swan River. After the discovery of gold in Kalgoorlie in 1893, a number of Chinese, who had been unable to take up Miners Rights in the goldfields for racial reasons, joined them in South Perth. The Chinese worked very hard and grew good quality fruit and vegetables, which the local population were happy to buy. In the 1920s, the Chinese started to market their produce to the wider population of Perth via the James Street markets. The Chinese market gardens successfully operated for many years, despite many attempts by local authorities to serve them with notices allegeing uncleanliness or health hazards. They lasted until the 1950s before they were dismantled.

With the help of convict labour, the district received more settlement and better roads. Nevertheless, the South Perth area still had a small population. 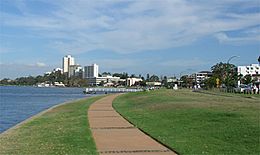 The real estate boom of the 1880s, which coincided with the discovery of gold in the Kimberley saw a slow but appreciable growth in the number of residents. Several of Perth's more substantial citizens saw South Perth as a peaceful and tranquil suburb, and by the end of the 1890s, the population was about 400, with many elegant homes. The Zoological Gardens and the Royal Perth Golf Club were opened in 1898 and the area became popular with tourists from the town of Perth across the river.

The Perth Zoo is located in the suburb of South Perth. It is open every day of the year and its exhibits include Australian wildlife, as well as exotic and rare animal species. It opens from 9 am to 5 pm daily with additional hours during summer and special events. 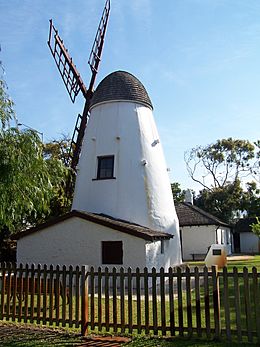 The Old Mill is visible to people driving south over the Narrows Bridge.

The Old Mill Theatre is a local amateur theatre company based on Mends Street.

The Sir James Mitchell Park is a stretch of park lands along the foreshore. It is dotted with gazebos, family picnic areas and barbecue facilities. It is adjacent to the Swan River, stretching between the Narrows Bridge and the Causeway Bridge. It has dedicated and separate paths for bicycling and walking.

South Perth is an expensive area for land due to its location near the river and central business district. Consequently, there are a comparatively high number of highrise apartment towers in the suburb, generally near the foreshore. There are also a number of large mansions. Significant numbers of townhouses and some older houses fill in the suburb.

All content from Kiddle encyclopedia articles (including the article images and facts) can be freely used under Attribution-ShareAlike license, unless stated otherwise. Cite this article:
South Perth, Western Australia Facts for Kids. Kiddle Encyclopedia.