Kids Encyclopedia Facts
This page is about a local government authority. For the suburb, see South Perth, Western Australia. 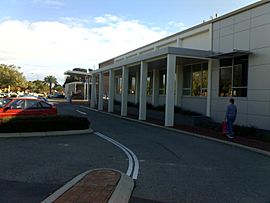 The City of South Perth is a local government area in the inner southern suburbs of the Western Australian capital city of Perth about 4 kilometres (2.5 mi) south of Perth's central business district. The City covers an area of 19.9 square kilometres (7.7 sq mi), maintains 203 kilometres (126 mi) of roads and a little over 4.3 km2 of parks and gardens, and had a population of about 42,000 at the 2016 Census. The City is the entirety of the state electoral district of South Perth. An area of Kensington joined into South Perth after the 2013 redistribution, although dwindling population growth in Victoria Park may mean that part of the City will move back.

The area broadly forms a peninsula, being bounded on three sides by the waters of the Swan and Canning rivers.

In order for the poll to prevent the amalgamation from proceeding, at least 50% of electors from either local government were required to vote, and of those, more than half needed to vote against the proposal. At the conclusion of the poll at 6.00pm on 7 February 2015, the outcome was that for South Perth, 50.83% of the City's 26,789 electors voted, with 77.75% voting against the proposal. Although only 38.02% of the Town of Victoria Park's 20,136 electors voted, of those, a clear majority (61.58%) voted against the proposal. However, with more than 50% poll returns, the City of South Perth response was sufficient to cancel the amalgamation of these local governments, and they remained as separate entities.

The City of South Perth is divided into six wards, each of whom elect two councillors. The mayor is directly elected.

The suburbs of the City of South Perth are known for being very affluent due to their proximity to the river, private schools and the CBD, all are well above the state's average. The following table contains the suburbs and their median house price.

The City of South Perth has two libraries with branches in Manning and South Perth.

The two libraries have in excess of 70,000 items over both locations. The collection contains digital and traditional items including, new and popular titles across an extensive range of books, music CDs, DVDs, talking books, magazines and playaways for the whole family.

A regular events program run throughout the year is designed to educate and entertain all ages.

The collection provides and preserves information about the suburbs of South Perth, Como, Kensington, Manning, Karawara and Salter Point.

The City of South Perth is home to numerous primary schools, and five major secondary schools.

All content from Kiddle encyclopedia articles (including the article images and facts) can be freely used under Attribution-ShareAlike license, unless stated otherwise. Cite this article:
City of South Perth Facts for Kids. Kiddle Encyclopedia.