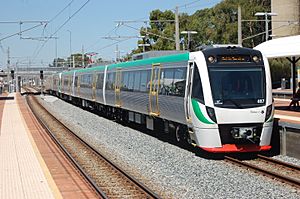 Transperth is the brand of the public transport system in Perth, Western Australia. Transperth was launched in 1986. It supplies public bus, train and ferry services.

Train services run on five lines that spread over the Perth metropolitan area. The lines are named Joondalup, Midland, Fremantle, Armadale, and Mandurah. The Mandurah was opened late in 2007. All trains are operated using electricity. A new line to the Perth Airport via the Bayswater railway station is being constructed which is expected to be compeleted in mid-2021.

Bus services run throughout the metropolitan area. A circular bus route is the CircleRoute which links major shopping centres, universities and railway stations.

Ferry services operate across the Swan River between the Perth CBD and South Perth. The ferry is popular for people to go to the zoo located in South Perth. 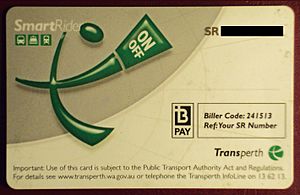 Passengers can take rides by buying cash tickets or using the ticket system known as SmartRider.

All content from Kiddle encyclopedia articles (including the article images and facts) can be freely used under Attribution-ShareAlike license, unless stated otherwise. Cite this article:
Transperth Facts for Kids. Kiddle Encyclopedia.