The marine iguana (Amblyrhynchus cristatus) is an iguana found only on the Galápagos Islands that has the ability, unique among modern lizards, to forage in the sea, making it a marine reptile. The iguana can dive over 9 m (30 ft) into the water. It has spread to all the islands in the archipelago, and is sometimes called the Galápagos marine iguana. It mainly lives on the rocky Galápagos shore to warm from the comparatively cold water, but can also be spotted in marshes and mangrove beaches. 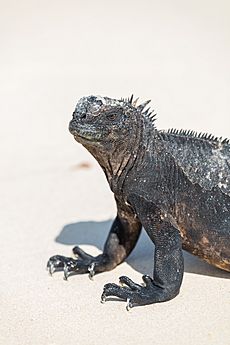 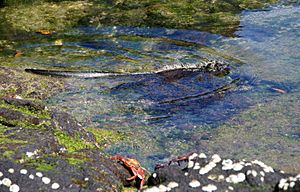 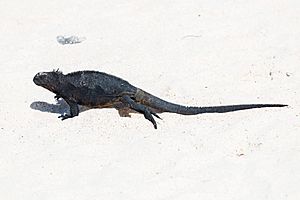 On his visit to the islands, despite making extensive observations on the creatures, Charles Darwin was revolted by the animals' appearance, writing:

The black Lava rocks on the beach are frequented by large (2–3 ft [0.6–0.9 m]), disgusting clumsy Lizards. They are as black as the porous rocks over which they crawl & seek their prey from the Sea. I call them 'imps of darkness'. They assuredly well-become the land they inhabit.

Marine iguanas are medium-sized lizards i like lizards (200–340 mm (7.9–13.4 in), adult snout–vent length) and are unique as they are marine reptiles due to their foraging on inter- and subtidal algae only. These iguanas forage exclusively in the cold sea, which leads them to behavioral adaptations for thermoregulation.

Amblyrhynchus cristatus is not always black; the young have a lighter coloured dorsal stripe, and some adult specimens are grey, and adult males vary in colour with the season. Dark tones allow the lizards to rapidly absorb heat to minimize the period of lethargy after emerging from the water. The marine iguana lacks agility on land but is a graceful swimmer. Its laterally flattened tail and spiky dorsal fin aid in propulsion, while its long, sharp claws allow it to hold onto rocks in strong currents.

Marine iguanas vary in body size, which is different depending on the island the individual iguana inhabits. The iguanas living on the islands of Fernandina and Isabela (named for the famous rulers of Spain) are the largest found anywhere in the Galápagos. On the other end of the spectrum, the smallest iguanas are found on the island on Genovesa.

Adult males weigh from a maximum of 12–13 kg (26–29 lb) on southern Isabela to about 1–2 kg (2.2–4.4 lb) on Genovesa. The reason for this difference in body size of marine iguanas between islands is due to "variability in algal productivity and sea surface temperature."

Marine iguanas are sexually dimorphic with adult males weighing about 70% more than adult females. There is a correlation between longevity and body size, particularly for adult males. Large body size in males is selected sexually, but can be detrimental during El Niño events when resources are scarce. This results in large males suffering higher mortality than females and smaller adult males. The mortality rates of marine iguanas are, in fact, explained through the size difference between the sexes. 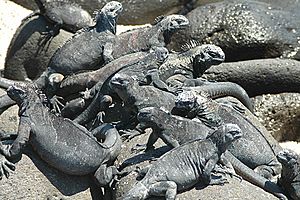 Marine iguanas in the Galápagos Islands

The marine iguana forages exclusively on inter- and subtidal algae, and 4–5 red algal species are their food of choice. During neap low tides, however, the usually avoided Ulva lobata, also known as green algae, is eaten more often since the preferred red algae are not easily available.

This algal diet varies in accordance to the algal abundance, preferences, and foraging behaviour. Only 5% of marine iguanas dive for algae offshore, and these individuals are the large males. This behaviour is advantageous because these males experience less competition for food from smaller males and females, who are restricted to foraging during low tide. Foraging behavior changes in accordance to the seasons and foraging efficiency increases with temperature. These environmental changes and the ensuing occasional food unavailability have caused marine iguanas to evolve by acquiring efficient methods of foraging in order to maximize their energy intake and body size. In fact, during an El Niño cycle in which food diminished for two years, some were found to decrease their length by as much as 20%. When food supply returned to normal, iguana size followed suit. It is speculated that the bones of the iguana actually shorten as shrinkage of connective tissue could only account for a 10% change in length.

The physical structure of the iguana also facilitates foraging as they have “long claws, tough skin, blunt heads, flattened tails, and well-developed salt glands.” A flat snout and sharp teeth enable it to browse on algae growing on rocks. A nasal gland filters its blood for excess salt ingested while eating, which is expelled through the nostrils, often leaving white patches of salt on its face. 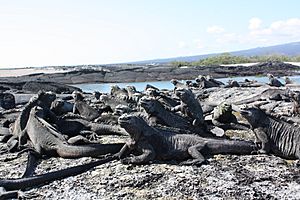 As an ectothermic animal, the marine iguana can spend only a limited time in cold water diving for algae. Afterwards it basks in the sun to warm up. Until it can do so it is unable to move effectively, making it vulnerable to predation. However, this is counteracted by their highly aggressive nature consisting of biting and expansive bluffs when in this disadvantageous state. Their dark shade aids in heat reabsorption.

Fights sometime occur during the breeding season but are generally harmless; males will bob their heads as a threat and if the other suitor responds, both will thrust their heads together until one backs away.

Researchers theorize that land iguanas and marine iguanas evolved from a common ancestor since arriving on the islands from South America, presumably by rafting. The marine iguana diverged from the land iguana some 8 million years ago, which is older than any of the extant Galapagos islands. It is therefore thought that the ancestral species inhabited parts of the volcanic archipelago that are now submerged. The two species remain mutually fertile in spite of being assigned to distinct genera, and they occasionally hybridize where their ranges overlap.

The subspecies of the marine iguana are identifiable by their sizes as well as by distinct colorations. For example, the Espanola race is redder while the Santiago iguanas are greener. The marine iguanas may appear to have a light colored face, but in fact, this is due to salt from specialised cranial exocrine glands, expelled from the body in a process much like sneezing. This salt becomes encrusted on their faces. This adaptation allows them to excrete excess salt due to foraging on marine algae. Although the marine iguana resembles a lizard, it has developed several adaptations that set it apart. These include blunt noses for efficiently grazing seaweed, powerful limbs and claws for climbing and holding onto rocks, and laterally flattened tails for improved swimming. Compared to the land iguana its limb bones, especially those from the front limbs, have become more heavy and compact (osteosclerosis), providing ballast to help with diving.

The marine iguana has no evolved defences against introduced predators. These include rats, which tend to feed on the eggs, cats, which can feed on juveniles, and dogs which may threaten adults.

All content from Kiddle encyclopedia articles (including the article images and facts) can be freely used under Attribution-ShareAlike license, unless stated otherwise. Cite this article:
Marine iguana Facts for Kids. Kiddle Encyclopedia.