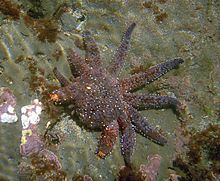 Regeneration means that an organism regrows a lost part, so that the original function is restored. It is a term in developmental biology.

The ability to regenerate differs in different groups. Whereas newts, for example, can regenerate severed limbs, mammals cannot. Limb regeneration in newts occurs in two major steps, first de-differentiation of adult cells into a stem cell state similar to embryonic cells and second, development of these cells into new tissue more or less the same way it developed the first time.

Simpler animals like flatworms can regenerate because the adults retain clusters of stem cells in their bodies. These can migrate to damaged parts of the body, then divide and differentiate to provide the missing tissue.

All content from Kiddle encyclopedia articles (including the article images and facts) can be freely used under Attribution-ShareAlike license, unless stated otherwise. Cite this article:
Regeneration Facts for Kids. Kiddle Encyclopedia.