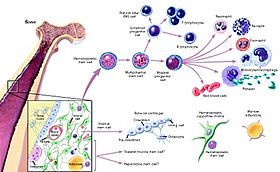 Cellular differentiation is the process by which a less specialized cell becomes a more specialized cell type. It is part of developmental biology. Different tissues have different kinds of organelles inside the cells.

Differentiation occurs many times during the development of a multicellular organism. The organism changes from a single zygote to a complex system of tissues and cell types. Differentiation is also a common process in adults: adult stem cells divide to make fully-differentiated daughter cells during tissue repair and during normal cell turnover.

Differentiation dramatically changes a cell's size, shape, metabolic activity, and responsiveness to signals. These changes are largely due to changes in gene expression. With a few exceptions, cellular differentiation almost never involves a change in the DNA sequence itself. It does involve switching off many genes not needed in a particular tissue. Thus, cells in different tissues may have very different physical characteristics despite having the same genome.

All content from Kiddle encyclopedia articles (including the article images and facts) can be freely used under Attribution-ShareAlike license, unless stated otherwise. Cite this article:
Cell differentiation Facts for Kids. Kiddle Encyclopedia.