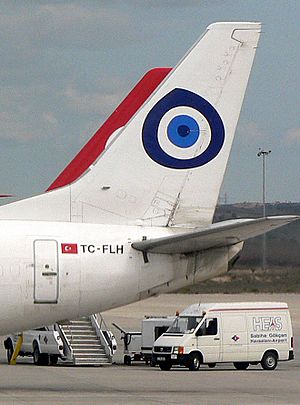 The ancient blue and white "Nazar boncuğu" is a symbol against the evil eye. Here the stylised eye appears on a Turkish airplane

Apotropaism or apotropaic magic is the use of magic rituals against evil or harmful influences like the evil eye or invidia, which was thought to cause injury or bad luck. This can be a long ritual, or it can take the form of simply wearing an amulet or other token, against bad luck.

All content from Kiddle encyclopedia articles (including the article images and facts) can be freely used under Attribution-ShareAlike license, unless stated otherwise. Cite this article:
Apotropaic magic Facts for Kids. Kiddle Encyclopedia.